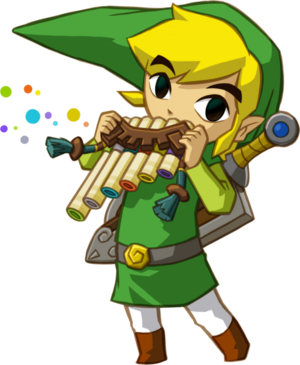 During the opening section of the game, Link will receive an item from Zelda called the Spirit Pipes. This magical heirloom is an instrument passed down by the Royal Family of Hyrule. Anjean gave this to Tetra when she first arrived in New Hyrule, and asked her to keep it and to protect the land with it. Zelda says that Tetra played it for her whenever she felt sad, and its music would cheer her up immediately. The Spirit Pipes are one of the sacred instruments of the Lokomos, and so play a very important part in Link and Zelda's quest. There are five Songs that Link will learn at Sound Stones during his quest, as well as five Songs of Restoration, each played only once, that restore the Spirit Tracks to the Temple of each Land.

The Song of Awakening allows Link to wake up the sleeping statues that are scattered throughout Hyrule. In the overworld, they'll give Link clues about how to progress. Inside a Temple, they'll offer to reveal the locations of all treasure chests on the floor you are on (take a note on your map, since they disappear when you leave the Statue) for 20 Rupees. Learned in the Woodland/Forest Sanctuary near the stone head puzzle.

The Song of Healing (sounding nothing like the Song of Healing from Majora's Mask) makes the Spirit of Healing appear to refill Link's heart meter. It can be used just once, and only if you're in a Temple or the Tower of Spirits. To refresh the Spirit's ability after you've used it, exit and re-enter the Temple. Learned at the entrance to the Wooded/Forest Temple.

The Song of Discovery makes hidden treasure chests or other objects appear. Required to find the Regal Ring for Linebeck III in the Trading Post to pay the Bridge Worker and enter the Ocean Land. Learned from the Sound Stone at the centre of Anouki Village.

The Song of Birds calls birds carrying whip grips, and Cuccos, over to your position. Only useful once you obtain the Whip from the Ocean Temple. This song is necessary to find the Lokomo of the Ocean Land, Carben, so you can take him back to the Island/Ocean Sanctuary and play the Song of Ocean's Restoration. Also required to find all 20 Stamps. Learned in Papuzia Village by playing the Song of Discovery at a tree south of the Wise One's house to reveal a hidden Sound Stone.

The Song of Light activates crystal light beacons (even invisible ones) to reveal hidden paths or other secrets. Learned from the Sound Stone in the Trading Post near Linebeck's grave.

There are five different Songs of Restoration, one for each land (including the Desert Land). The Songs are duets, requiring the Spirit Pipes and an instrument owned by the Lokomo of that land. During the story, you will play each Song of Restoration once. When played successfully, the Glyph/Rail Map of that land will start to glow, and the Spirit Tracks leading to that land's Temple will appear.