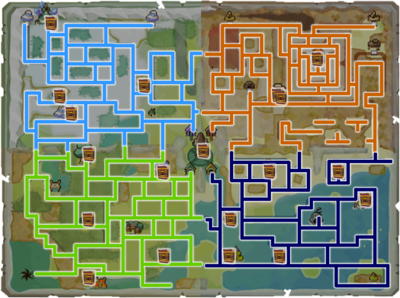 When Link returns home to Outset/Aboda Village after the first Temple, Niko has a favour to ask of him. In his youth, when he travelled the land, he saw little stamp stands scattered throughout Hyrule. Back then, he had nowhere to put the stamps. Now, he has a little stamp book. He gives this to Link, asking him to find as many stamps as he can, and put them in this book. There are 20 stamps scattered throughout the four Lands. Niko will reward Link with prizes when he shows him 10, 15 or all 20 stamps.

The easiest of the 20 stamps to find, this is located to the left of Alfonzo's house.

When you get off the train, head north-east to find a northern section of the village. Go straight north, and the stand is behind a tree with a beehive.

In the northeast corner of the town, there is a staircase, at the top of which are some blocks. Bomb them. Walk west on the town walls to the northwest corner. The Stamp Stand is here.

Just before the location of the Sound Stone, turn north. The Stamp Stand is directly north.

In the northeast corner of the 1st floor is a massive cloud of toxic fog. Clear it with the Whirlwind and go east down this area. The Stamp Stand is at the end of the path alongside a switch that creates a small chest in another area.

In the cave at the lower left of the map, near the end, to the left, is a small area you can jump to. The Stamp Stand is there.

As soon as you step off the station (before even the fences), turn east. Go as far as possible this way, then go north. The Stand is behind some trees.

As you climb towards Steem's hall, you'll see a thin, high staircase. Climb it to find the Stamp Stand.

Behind Ferrus' hut, walk north to the lake. You should see an Ice Flame. Use the Boomerang and trace a path for it through the Ice Flame across to the next alcove, and back to you. Cross over the icy path this makes to find the Stamp Stand.

floor B1 in the blizzard temple. the stand is located on the floor at the right hand side of the top lefthand room

On the bottom right of the map there is an island accessible by hanging from birds. Call one over if you cannot get to it using their natural flight path. Head south, off-screen and you will get to a new area of the island with a new map. Your target is the bottom left island on the map. The others islands contain various chests with rupees and a dragon scale. You may have to call a bird once or twice to get to this stamp stand.

To get the stamp you must go on top of the entrance to the sanctuary. After arriving at the island, go up the right-hand side (if you have the bridge down, if not you must go through the cave) Go over to the wooden bridge to the right, and near it, play the song of the birds. (if it says no birds are around, adjust your position) Ride the bird to the top of the cliff around the entrance and behind the palm trees is the stamp.

Requires the Bombs, the Boomerang, and the Whip.

Go to the second level using the stairs around the top center of the screen. You will see a crack near the entrance to the second floor on the left; bomb there, but do not enter. Go to the right of the second floor entrance and bomb the middle of that side to find a second secret entrance. Use the whip to clear the jagged vines and use your boomerang to hit the switch. Go to the left hand entrance; use the whip to get across the gap, but make sure you time your jump correctly! Use your whip to pull the tongue switch and ride the block to the stamp station!

By the entrance to the cave, play the Song of Birds, then use your Whip and grapple the bird. It will bring you to the ledge on top. Let go of the bird and it will be beside where you land.

Pick up one of the Cuccos which are wandering around and head to the right of the map where the water is. The map shows two islands. Go to the pointed piece of land which points to the smaller island. Cucco in hand, jump. You should fall/float. Jump to the larger island where the stamp station is. Use the Cucco to jump back to primary island.

Upon receiving the sand wand and completing the puzzle with the rock and the launcher, go down the stairs to B1. Use the wand on the quicksand pit and then use the wand to make the sand monsters stop. Pick them up and place them on the switches. Here you will find a large vat of quicksand which goes both left and right. Go left, using your wand to make a path. Make sure you're quick enough that the sand does not fall while you are standing on it. When you find the arrow shooters, make sure you time it so your shield is in front of you, so you don't get hurt. A little to the right is the platform with the stamp station.

Requires the Whip and the Bow and Arrows.

Head to the western area of the village. Go west to the lava pit. Cross the first set of whip posts. Look north and you'll see another post. On the other side, though, are two Deku Babas. Shoot them with arrows. Cross the whip post. Left of where you land is the Stamp Stand, surrounded by more Deku Babas.

As you walk south through the valley, you'll see one lit torch. Use your Boomerang to light all the other torches down to the far southern end of the valley. This creates a series of bridges which you must cross to find the Stamp Stand.

The stamp stand is on the left side of floor B1, and the switch to get to it is in the botom left corner.

There are three rewards that Link will receive from Niko when he shows him 10, 15 or 20 stamps.

If Link shows Niko 10 stamps, he'll be rewarded with the Ancient Shield/Shield of Antiquity. This shield is identical to the one used in Phantom Hourglass. It cannot be eaten by Like-Likes. When Niko sees Link with his soldier's uniform and this Shield, he'll say that he looks just like 'an old, dear friend'. If Link already has a shield, that will be left in Niko's house, and Link can switch shields there between the normal shield and the Ancient Shield/Shield of Antiquity.

For collecting 15 stamps, Niko will allow Link to wear his engineer's clothes from the beginning of the game. Niko thinks that these suit Link better than the Recruit's Uniform. If Link talks to Niko, he can change his clothes.