Early on in your trek to Faron Woods, you will meet three shadow beings. You can defeat the first one just like you did in the Ordon Spirit Spring, but you must destroy the last two in a single attack, or the remaining one will revive the other two. When Midna appears to advice you, destroy the last two or three simultaneously, hold

to make an orange circle appear around you. Then, touch each shadow being with the circle (still holding

to defeat all of your targets in one fell swoop.

After defeating the shadow beings, you are visited by a light spirit. He tells you that his light has been stolen by the shadows, and that is the cause of the darkness upon the land. He asks you to find the sixteen tears of light, which will restore light back to Faron Woods and restore you to your original form.

The insects that stole the tears are nearly invisible to you until you engage your senses. The insects are marked with white dots on your map.

On the path to get further into the woods, you will encounter two insects. Engage your senses and attack them. Don't leave until both the tears are in your possession.

On your way up the path, you'll watch two bugs scurry under a gate. Before you give chase, go to Coro's house to defeat the insects there. One of them is on the outside of the building, dash into the building to knock it down. The other two are inside. Go up the ramp south of the house. Midna will call you when you get to the edge, allowing you to jump to an open window. Listen to Coro's spirit to see the bugs pop up from their hiding spot. Defeat them and collect their tears.

Head back to the gate and use your senses to find a digging spot. Tunnel to the other side, then defeat the two insects waiting there and collect their tears. Continue until you reach the clearing in the middle of the forest. Dash into the rock wall to knock two bugs loose there and defeat them.

A poisonous fog covers most of the clearing, making it impossible to walk along the floor. Climb onto a flat rock and use Midna's help to jump over the fog into the trees. You'll find three more bugs in a large, hollowed out stump. Jump along until you reach the other side, avoiding swinging logs along the way. Once there, dig up two more bugs and defeat them.

Once you emerge from the clearing, you'll face three more shadow beings. Defeat the loner first, then use Midna's

button dark energy attack to destroy the last two. The final pair of insects is on the steps leading into Forest Temple, tormenting a monkey spirit. After you defeat them and collect their tears, you will be transported back to the Faron Spirit Spring.

Note: On the Wii U, you can take on twelve instead of sixteen, making your journey of gathering lights quite easier than before.

With its light returned, the forest spirit Faron returns you to your human form and gives you a green tunic. He tells you of an immense dark power locked away within the Forest Temple. 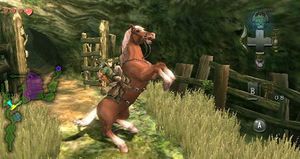 Link riding Epona past the gate in Faron Woods

You cannot dig under the gate to the forest in human form and you can't jump it without a horse, so go to Coro and talk to him. He will give you the key and offer to sell you a bottle of lantern oil for 100 rupees. You can find the cash by cutting the grass around the area.

The clearing is still covered with a poisonous fog. When you reach it, a monkey will steal your lantern and walk into the fog, burning a path for you to follow. Defeat the enemies along the way, and pick up your now-empty lantern when the monkey drops it.

Either refill your lantern using the bottle of lantern oil you may have purchased from Coro, or stop at Trill's shop. Scoop your lantern or an empty bottle into the pot, then make your payment by the shopkeeper. Give the bird at least one rupee so it doesn't attack you as you leave.

As you go to the Forest Temple, a golden wolf will block your way. It will leap on you and transport you to a white arena. There, it will transform into a knight and teach you the Ending Blow, executed by pressing

while your enemy is down. There is no way to avoid this encounter, nor would you want to as it is required down the road.

After the encounter, burn the web that blocks the entrance, then put the lantern away to conserve fuel.