From StrategyWiki, the video game walkthrough and strategy guide wiki
< The Legend of Zelda: Twilight Princess
Jump to navigation Jump to search

Near the settlement of Ordon Village, you sit and admire the serene view. "Tell me…" Rusl asks you, "Do you ever feel a strange sadness as dusk falls?" But enough of this melancholy! Rusl is delivering something to the royal family of Hyrule in two days' time. Rusl encourages you to explore the kingdom and the world around it. You lead your horse, Epona, who is carrying some bundles of kindling you both gathered, over the Ordon Gorge Bridge. Rusl locks the bridge gate. Rusl rejoins his family, Uli and Colin. He leaves you and Epona at your woodland home, and heads to the village entrance. Colin takes Epona's reigns and leads her off to rest. You climb up into your home. A moment later; Fado yells up to you. He needs help wrangling a few goats.

Head over to Fado when the opportunity presents itself, and press

to speak to him. He tells you to hurry up and bring Epona with you. You saw Ilia leading Epona down the forest path to the north of your house, so take that route. When you get to the spring, pluck a reed from the ground and use it to whistle for Epona. Mount her and ride her into town.

Travel through town, take the south exit to the ranch and talk to Fado. He will ask you to round up ten goats for him and get them into the barn. The easiest way to do this is to start by making sweeping runs at the far end of the ranch and then narrowing in on the barn. Keep the goats between you and the barn, and press

to make them run faster.

Following the herding exercise, Fado will set up fences for you to jump over with Epona. Simply guide Epona to a fence, press

to make her run faster, and she will jump it automatically. When you are tired of jumping fences, jump the gate at the north end of the ranch to get out.

Following your time at the ranch, a new day will dawn and the village kids will be waiting outside your door. They mention a Slingshot on sale at Sera's Sundries and how they would really like one. When you go to the shop, however, you'll find that Sera's cat is missing and she won't sell anything until it returns. 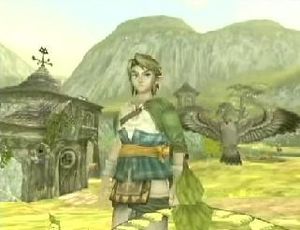 Link after summoning a hawk.

Just to the westeast of the shop, Jaggle is standing on a tall stone pillar overlooking the water. Talk to him from below, then climb up. He will show you that Sera's cat is trying to catch a fish and that he has spotted some grass on another rock platform. If you want, you can pick the grass he shows you, and use the falcon to attack the bees' nest. Otherwise, you can wait until you have the Slingshot. From there, jump across the roof and over to the last platform in the middle of the lake. Call for a falcon, and aim for the monkey on the rock to the northwestnortheast. The falcon will bring you the cradle the monkey was carrying.

Take the cradle to Uli, who will give you the Fishing Rod. Cross the midvillage bridge and walk to the dock on the far side of the mill. Drop a line and catch two fish (One on the Wii U version). Sera's cat will steal the second one and run home.

Return to the shop, and purchase the Slingshot for 30 rupees. Sera will give you a half-full Bottle of milk for returning her cat. You can find rupees by running around in tall grass and by smashing rocks and pumpkins. There are also some larger rupees scattered around the village. Climb the ladder on the southwestsoutheast side of the midvillage bridge, then hop up some boxes and take another ladder up to the top of the house where you'll find a yellow rupee. While you're up there, you can use the falcon grass to nab a chicken and fly over to another yellow rupee on ridge to the south. There is also a blue rupee hiding under one of the rocks there. Lastly, there is a yellow and a blue rupee at the top of the tree where you knocked down the bees' nest. You should have more than 40 rupees when you are done here. 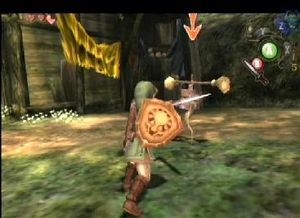 After you purchase the Slingshot, return to your home. The village kids will ask you to demonstrate your skills by hitting targets. After hitting them all, you will discover that Rusl left an item in your house. Use the Slingshot to destroy the spider on your ladder, then climb inside to find a treasure chest with the Wooden Sword inside.

After you exit your house, the village kids will want to see your sword skills. Follow the onscreen instructions to demolish the dummy.

Note: On the Wii, you can choose to point the Wii Remote or go on the menu and turn the pointer off for a more traditional approach. Also optional for arrows and even flying a bird in the Zora river passage to Lake Hylia.

Talo and Malo have run after a monkey. Climb onto Epona and head north. Jump a fence after you cross the bridge, take a sharp turn to the westeast at the water, and advance to the Forest Temple path, then dismount. You discover Talo's wooden play sword just inside the cave.

A sign outside the cave warns that it is too dark to venture in without a light, and a spider web prevents further movement inside until you have fire. Head northwestnortheast from the cave entrance into a clearing and talk to Coro to receive the Lantern.

Go back to the cave and use the lantern to burn the spider web. Destroy the enemies and light torches to get a better view of your surroundings as you explore. Half way through the cave you can turn left up a path with three enemies. At the end is a chest containing a yellow rupee (next to the chest is a torch).

Piece of Heart #1
Enter the cave in the northwestnortheast corner of Faron Woods before the Forest Temple. Light the two torches at the back of the cave, and a chest with the Heart Piece will appear on the alcove above the small wooden chest.

When you emerge from the cave, you'll see two red-marked destinations on the Faron Woods map. Go to the item in the northwestnortheast first. It is a Small Key in a chest. While you are there, it is also an opportune time to pick up Piece of Heart #1.

Now go to the other destination on the northeastnorthwest end of the map, which puts you on the doorsteps to the Forest Temple. After Trill's shop, stay to the left and walk up a small ramp, then jump down behind some tall grass and open the chest to find a yellow rupee. Go north up the path and defeat the Bokoblins guarding the cage, then smash it to free Talo and the monkey he was chasing.

The End of the Beginning[edit]

Enemies descend at the springs.

Upon your return to Ordon, Fado will ask you to herd twenty goats in three minutes. Call Epona to get started. If you take more than three minutes, you will still proceed, but Fado will comment on your lack of speed.

After you leave the ranch, you will engage in a brief conversation with Ilia and the mayor that results in Ilia taking Epona away to the spring. You can't go anywhere beyond your house until you give Talo your Wooden Sword, however.

When you get to the spring, talk to Colin through the locked gate. He will tell you of a tunnel into the spring. Head back south along the path to the clearing, and you'll find the entrance on the eastwest side. Crawl through and make a leftright turn to get to the spring.

A cutscene shows marauders on a boar knocking you out and taking Ilia and Colin. After you awake, you give chase, not knowing what fate might befall you as well.

Note: On the Wii U version, the normal mode should refer to the Gamecube version and the hero mode refer to the Wii version. Secondly, whenever you open your file, you'll be introduce to the rupees once, compared to the Wii and Gamecube versions where you'll be introduced every time. Also, saving rupees on the Wii and Gamecube has been eliminated, but some of the chests throughout have the Hylian alphabet which can be used online. Lastly, you can't access beyond the lake where the monkey is due to the fence that's been built to block you from swimming there.

[Go to top]← Walkthrough | The Beginning | Into Twilight →