The Lord of the Rings: The Third Age

From StrategyWiki, the video game walkthrough and strategy guide wiki
Jump to navigation Jump to search
The Lord of the Rings: The Third Age | Table of Contents | Gameplay | Walkthrough 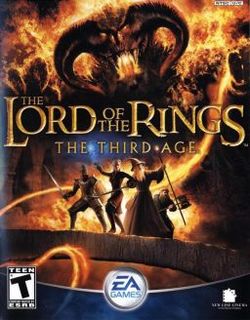 The Lord of the Rings: The Third age is a multi platform turn based role-playing game developed by EA Redwood Shores and published by EA Games for the PS2, GameCube and Xbox video game platforms released in 2004. A much different tactics version of the game was released for the GBA by Griptonite Games though it was still published by EA Games. The console version of this game features a large, semi linear exploratory mode in which most time will be spent in as well as an instanced battled screen familiar to many RPG players. There are 9 different regions that the player will explore. 3 of which will be locations from The Fellowship of the Ring, 3 from The Two Towers and 3 from The Return of the King. Through these Regions, the player will be take a party of starting from 2 in the first region to ultimately 6 by the end of the second region. During battles, the player is limited to 3 active characters, with special exceptions for some encounters.

A unique addition to The Third Age is its "Evil Mode" where upon completing a region, the player can return to the region they had just completed and play as the forces of evil. The player must then defeat the heroes through several instanced battled and have the possibility of receiving rewards not found anywhere else throughout the game.