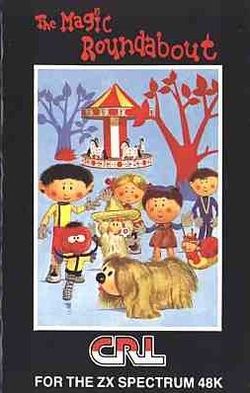 The Magic Roundabout is an action game which was released by CRL Group PLC on the Sinclair ZX Spectrum in 1984; it is based upon the French television series La Manege Enchante, by Serge Danot (1931-1990), which initially aired on its own country's television network in its own language, during 1963, but it was later appropriated by the English actor Eric Thompson (1929-1982) in 1965 for BBC television in the United Kingdom (and it begat a movie, Dougal and the Blue Cat, in 1970).

Help the frantic
Dougal build his
sugar house before
it's time for bed,
whilst avoiding all
the other "Magic
Roundabout" charac-
ters who can steal
his sugar.
© Danot Enterprises Limited 1984

This is the full view of the Magic Garden of Mr. Rusty; there is a French 4-4-0 steam engine in its top-left corner (even though there are no rails for it to run on), and the eponymous roundabout itself is in the centre (although it does not play a major part in the game). Sugar cubes shall be placed all over the garden, and Dougal will have to gather them up one at a time and bring them back to the magic toadstool (which is just to the top-left of his starting position, but as mentioned above, if his energy gets too low, he will eat the next cube he gathers up!). Occasionally, one of Dougal's so-called "friends" will come into view from one of the four sides of the screen - and if they should touch him, they'll cause him to lose one of his three lives. Once Dougal has put the last cube of his house in place, it will disappear, and he will have to start building another one; the game will continue until Dougal runs out lives or the garden runs out of sugar cubes (and in the case of the latter, you must either intentionally lose your remaining lives or turn off the console).