The Magic of Scheherazade is played by advancing through five chapters, in order one at a time. Each chapter represents a complete and contained world with its own objectives and final boss to defeat. You cannot advance to the next chapter until the boss of the current chapter is defeated. Once you have advanced to a new chapter, there is no way to return to a previous chapter.

There is a general flow to completing each chapter. While no chapter is completed in an identical manner to every other chapter, the same basic progress is made through each chapter. 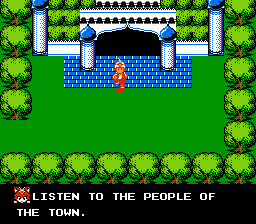 The primary purpose of visiting towns is to gather information from the villagers about the state of the world or time that you're in, but while you're there, there are several kinds of buildings that you can enter. Not every town will have every one, but there is usually one instance of each kind in every chapter.

Once you are finished in one town, you must set off and travel throughout the land in search of a new destination, possibly an item or person you are trying to find, or more than likely another town. As you travel, you are bound to encounter many enemies. Some of these enemies simply occupy the region you are exploring, and you will have to battle against them in real time. However, when you transfer from one screen to another, there is a chance that you will be pulled into a typical RPG turn-based battle.

Field battles occur quite frequently as you travel between towns, or when you are exploring caves and palaces. Enemies such as thieves or mermen will jump out of hiding places and attack you. Your typical means of offense are either the sword or the magic rod. Only Fighters may take advantage of the best sword in your possession, just as only Magicians can make use of the best Rods. You may also make use of any of the magic spells that you have memorized at your current level of experience. You should have Pampoo available at most given moments so that you can restore your health if you are heavily attacked. However, if your health or magic runs out, you will automatically consume any bread or mashroob that you possess in order to restore health or magic respectively.

As you destroy enemies, you will earn experience points and rise in levels. However, you will not earn one experience point over the amount needed to reach the maximum level for your current chapter. Defeated enemies drop items, most frequently single coins. However, they may drop other valuable items such as money bags, or health or magic drinks. You can flee from a field battle at any moment simply by exiting the current screen and scrolling to another screen. It is possible to encounter an enemy, scroll away, and return to the same screen and not find any enemies present. Remember this if you are low on health and wish to reduce the number of enemies you encounter along the way.

Turn-based battles are much more like the traditional battles that you find in most early RPGs. There are two phases before a battle actually begins. When you first encounter a turn based battle, you are given three options, FIGHT, ESCAPE, and PEACE. Fight initiates the second phase of the battle. Escape gives you a chance to flee the battle, but if it fails, you will be taken to the second phase. Peace gives you another chance to escape the battle by offering the enemies a bribe. If the enemies accept the bribe, you will be free to go, but if they reject it, you will be taken back to the first phase menu.

In the second phase, you are given an opportunity to form a battle party. You do have the option to select YOU FIGHT ALONE, which allows you to fight without the help of any allies, but this option is not recommended. The other two options are SELECT PARTNER and FORMATION. Select partner allows you to choose any two allies to join you in the fight, while Formation lets you choose two specific allies based upon one of six particular formations that can be formed with two preset allies. Formations only become available when all of the required allies have joined your party. Selecting formations over choosing your own party gives you the benefit of having access to powerful formation-only spells that damage all of the enemies. Once your battle partners have been selected, bread and mashroob are divided amongst your party members automatically. You can accept the distribution or alter it. Just as in field battles, bread and mashroob will be automatically consumed whenever an ally runs out of health or magic. When everything is ready, you still have one more opportunity to attempt an ESCAPE before the battle begins. Even if your first attempt to escape failed, you can try again now and you may succeed. Otherwise, you can remake your party or proceed to the fight.

Once the fight has begun, you will select from the following options each turn: FIGHT, ROD, MAGIC, TROOPER, and ESCAPE. If you choose to Fight, you will attack your enemies with your sword. If you choose Rod, you will generally get to attack before any physical attacks take place, but you will do less damage. Magic lets you choose from among your various spells. If the magic you choose is a formation-only spell, your entire party will immediately execute that spell, and you will make no other attack that turn; not even the Troopers will attack. Trooper allows you to replace any fallen Troopers with your back supply of more Troopers. However, you cannot exceed more than four at a time. Choosing Escape attempts to flee the battle and is still not guaranteed to work. Note that you are given three opportunities to escape (once in the first phase, once in the second phase, and once on your first turn) before any enemies attacks take place. Once you have made your selection for your main character, you may also enter instructions for your battle partners. Most allies have one form of attack and one or two spells which they may cast. The battle is over when all of the enemies are defeated, or when your main character is. If you win, you will earn experience points, Rupias, and possibly one dropped item.

Travel through the time door.

In every chapter, it is necessary to travel through time in order to complete all of the objectives for that world, and successfully face off with the boss in the final palace. In every chapter except the third, you travel back in time. There is little in the way of interaction between time periods with one exception. If you happen to plant a Rupia Seed in a magic field during an Alalart Solar Eclipse in the past, it will grow into a Rupia Tree in the future. If you visit the magic field at a later date, the tree will possess lots of Rupias which you can harvest and add to your wallet. Other than this, traveling through time is only a means to complete the chapter. You will typically find allies and items in the alternate time period which are needed in the present. You are free to travel back and forth as many times as you like, and you may even be required to travel back and forth more than once to complete an objective.

Explore the palace to find the boss.

Each chapter culminates with your party entering a palace somewhere in the world, either in the present, or possibly in the past. These palaces are home to a final boss which must be defeated in order to proceed to the next chapter. Each boss has two forms of attack, and a weakness that can usually only be exploited by an ally that you have collected in that chapter. Therefore, it is important to make sure that you collect every ally available in a given chapter to ensure that you will be capable of defeating the boss. Some allies are even found inside the palace itself. Palaces start off simple, but grow more and more complex as the chapters go by, covering more than one floor. You can purchase maps from shops in certain towns that will give you some idea as to the layout of the palace. Once you enter a boss fight, there is no way to escape it unless you use the Ring, an item given to you by Kebabu. If you escape from a boss fight and return, all of the damage you did previously will be restored, and the fight will start over from the beginning.