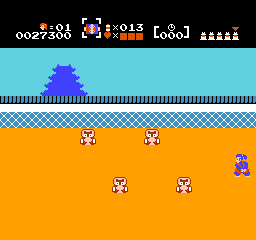 The Mysterious Murasame Castle is made up of five castles with two stages for each castle. Each castle has an outside stage where you must battle from east to west until you reach the entrance. From there, you must navigate from the bottom of the castle to one of the rooms at the top of the castle where the castle Daimyo awaits. You must defeat each Daimyo and collect all four colored orbs to gain access to the fifth and final stage. In this stage, you begin inside Murasame Castle, where you must fight your way to and battle the Murasame Statue to gain entrance to the stage where the final battle occurs.

Between the outdoor portion of a stage and the indoor portion, you are given a brief rest in a bonus stage. There, all of your remaining time is accrued as bonus points. Once this is finished, you are presented with four stationary Tanookis. Of these four, some will contain ammunition scrolls, while others will contain extra-life providing red pillboxes. However, one Tanooki will terminate the bonus stage, and you will not know which Tanooki that is until you touch it. You may also choose to end the bonus stage prematurely by walking off the left side of the screen.

You must clear the castles in the following order:

When you defeat Murasame Castle, the game will begin again outside of Aosame Castle at a higher degree of difficulty.