From StrategyWiki, the video game walkthrough and strategy guide wiki
Jump to navigation Jump to search
The Ooze | Table of Contents | Gameplay | Walkthrough 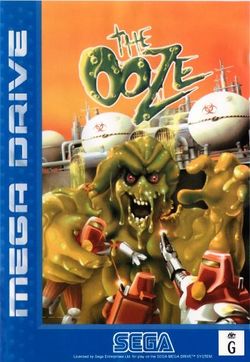 The Ooze is a video game developed by Sega Technical Institute for the Mega Drive/Genesis console and was released in 1995 during the latter days of the console. Dave Sanner of Sega of America, who was also behind the game Sonic Spinball, came up with the unique concept for The Ooze and was its lead programmer. The Ooze is something a cult favourite in recent times and has been included in numerous retro gaming compilations.

The Ooze is unique in that the central character or protagonist is based on an algorithmically-generated cellular automaton, and as such, the player character can be split apart and reformed like a viscous liquid. The art style evokes a cartoony H.R. Giger necessitated by the constraints of the medium. However some of the programming was fairly advanced for a 16-bit system, for example the speed powerup effect was actually created by decreasing the viscosity of the character.

The plot recalls numerous elements of the cult film The Toxic Avenger. The game starts with Dr. Daniel Caine, a brilliant scientist who invented an achromatic odorless toxic gas and its antidote, sneaking into the research lab where he worked in order to find evidence that crimes were being conducted by using the toxic gas he created. Crane discovered that his colleagues were planning to release a plague upon the populace, and make a fortune as they held the only cure. But, in the process, the Directorate of the company burst in, angry that the doctor had stumbled upon his plot. Caine was disposed of by means of chemical waste, but little did his former colleagues know that the chemicals did not kill him; instead, they altered him into the angry, sentient, amorphous creature known as "The Ooze". Swearing revenge, the doctor sought two things: his former colleagues and to assume his human form once again. He must now find the DNA helices scattered throughout the wasteland or else end up in a jar.