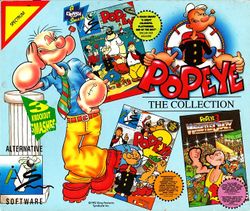 The Popeye Collection is a compilation game, that was released by Alternative Software only on the Sinclair ZX Spectrum in 1992; it includes that console's versions of the three British-made titles in the Popeye series (but no conversion of that inceptive Japanese-made one, for one had been developed for it by Amazon Systems in 1984 but never released), one on each of three magnetic tapes' A-sides: