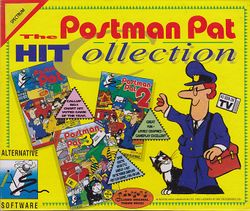 The Postman Pat Hit Collection is a compilation game that was released by Alternative Software on the Sinclair ZX Spectrum, Commodore 64, and Amstrad CPC in 1992, and it features all three of the company's entries in the Postman Pat series, on the same number of tapes (however, each of the three tapes only had the games recorded for one side):