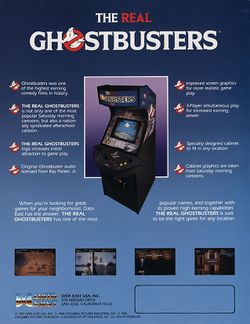 The Real Ghostbusters is a multi-directional shooter arcade game which was released by Data East USA in 1987; adapted from their Japanese parent company's Meikyuu Hunter G (which was released exclusively in its home country earlier on in that year) and based on the Columbia Pictures Television animated series with that same name, the players must use three 8-way joysticks for taking control of Peter Venkman (blue), Ray Stantz (red), and Egon Spengler (yellow), along with two buttons to make them fire shots at enemies (which, because they are unnamed, shall referred to as "Type X" enemies based on the order in which they first appear for this guide), and fire their ecto-containment beams at the ghosts they leave behind when killed, to capture them (which are one of the things that had been added specifically for this version of the game). Beaming up 100 ghosts is worth an extra life, but the players can also insert additional coins into their slot for extra life and ecto-beam energy at any time.

As mentioned on the Meikyuu Hunter G page, this version of the game also has two extra stages that are exclusive to it, along with an ending sequence; for those of you who are playing MHG, everything which applies to Stages 1-8 of this version remains the same, except for the addition of Spengler, the ghosts the enemies leave behind when killed, the new powerups, and the "Ghost Storage" cutscenes between the stages. This version of the game was also later converted for home play on the Amstrad CPC and Atari ST in 1988, and the Commodore 64, Commodore Amiga, and Sinclair ZX Spectrum in 1989 - however, because none of those five systems supports three players, Spengler was removed.