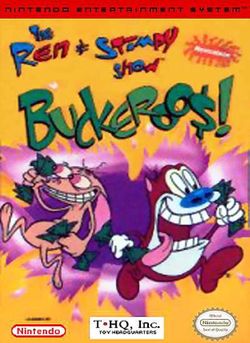 The Ren & Stimpy Show: Buckeroo$ (pronounced as "Buckeroos") is a platform game, developed by Imagineering Inc. for THQ and initially released on the NES in November 1993, but also released upon the SNES in April 1995; it is the third title in the Ren & Stimpy series and the second produced after Games Animations took over from Spümcø for the production of the show (although, much like with Veediots, which was released a month before, it is based on the Spümcø-produced episodes!).

This is taken from the back of the box, the front of the NES one's displayed in the image to the right:

Oh, hi kids!
I'm so excited about my new invention - the Gametron 5000
Moneymaker. It pays you money for playing video games -
the more you play, the more you make.
The first game is... let's see... "Space Madness". Oh my,
Space Commander Hoek has come down with Space
Madness, and his spaceship is going to smash into the
Earth! Luckily brave Space Cadet Stimpy (that's me!) is
there to save the whole planet!
The next game is "Out West", where Three-Fingered Hoek
and his faithful sidesaddle, Stimpy the Kid (that's me again!)
make their way through a dangerous frontier town to find
Mr. Horse and... uh... borrow him.
And that's not it - heavens, no! The final game is "Robin
Hoek of Logwood Forest", where Robin robs from the rich
gives to the poor, and rescues the bea-u-ti-ful Maid Moron
from atop yon castle...
Oh Reeennnn... are you ready to make oodles of money?
Money? Don't just stand there, man! Let's get playing!
© MTV Networks 1993