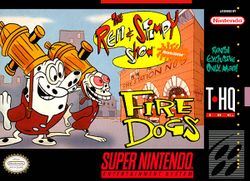 The Ren & Stimpy Show: Fire Dogs is a platform game that was developed up by Argonaut Games and released by THQ upon the SNES in June 1994; it is the sixth title in the Ren & Stimpy series and the fifth produced after Games Animations took over from Spümcø in the production of the show, but it is, like Veediots, Buckeroo$ and Quest for the Shaven Yak, based on a Spümcø-produced episode.

Stimpy, inside "The Firehouse", the Chief wants you to pick
up all of the equipment for the fire engine: the hose, the
beaver, the stinky socks... Just make sure you put out the
fires and don't let your Dalmatian paint wash off. Me, I'll rest
up for the REAL job.
Then, "On The Job", we'll race to the scene of a fire and
catch all of those airborne appliances that are being thrown
from buildings. Stimpy, my brainless buddy, you realize that
if we save all of this private property, we'll be heroes! We
could even be awarded the firehouse's highest honor - the
Sacred Golden Fire Hydrant Helmets!
© MTV Networks 1994

The password screen for this game also features "Suzy and Jill", two girls who appeared in one of the "LOG" sketches during the show's Spümcø years; this is due to the fact that "passwords" are given in the forms of makeup on "LOG for Girls" (which depicted it as a styling head), and you have to change the various bits of makeup on the screen to recreate them and push the Start button to activate them.