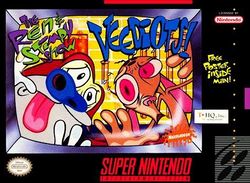 The Ren & Stimpy Show: Veediots is a platform game that was developed by Gray Matter for THQ and released on the SNES and Game Boy in October 1993; it is the second title in the Ren & Stimpy series, and the first after Games Animations taking over from Spümcø in the production of the show.

This is taken from the back of the box, the front of the SNES one's displayed in the image to the right:

Stimpy and I, we can't take it anymore, man! We've decided
to bust out of this two-bit tube and into the real world, but
we need your help! It goes like this...
First, in "The Boy Who Cried Rat", Stimpy is trying his hand
at being a mousecatcher... and the mouse, of course, it is I
in disguise! Man, I just hope that eediot doesn't eat me by
mistake...
Then, in "In The Army", I'm behind enemy lines, and up to my
earbones in all sorts of bad guys. Jeez! Who wrote this
episode, anyway?
In "Stimpy's Invention", that feline friend of mine is putting
together something in his crazy laboratory. Hmm... looks
like a hat...
Finally, in "Marooned", Space Cadet Stimpy has gotten
himself lost and digested in the furthest reaches of the
galaxy! Deesgusting!
Oh, yeah, everyone else is trapped in here, too: Mister
Horse, Space Cabbages, Muddy Mudskipper, and even
Powdered Toast Man, man! So grab those controls and get
us out of here!
© MTV Networks 1993