The Revenge of Shinobi

From StrategyWiki, the video game walkthrough and strategy guide wiki
Jump to navigation Jump to search
The Revenge of Shinobi | Table of Contents | Gameplay | Walkthrough 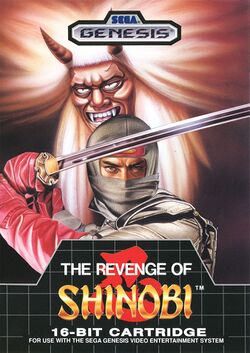 The Revenge of Shinobi, published in Japan as The Super Shinobi (ザ・スーパー・忍, Za Sūpā Shinobi?) is a video game developed and published by Sega in 1989. It was the first Shinobi game developed for the Sega Genesis.

The game is a sequel to Shinobi, a 1987 arcade game, and boasts an acclaimed soundtrack by the famous video game music composer Yuzo Koshiro. The game was included in the compilations: Mega Games 2, Mega Games 6, Sega Classics Arcade Collection (for Sega CD), and Sega Smash Pack (for Windows and Dreamcast).

The Revenge of Shinobi is a traditional side-scrolling platform game. The player controls Joe Musashi and must complete eight districts before the final confrontation with the head of Neo Zeed. Each district consists of three scenes, the last of which is a battle against a unique boss-character.