From StrategyWiki, the video game walkthrough and strategy guide wiki
< The Simpsons Hit & Run
Jump to navigation Jump to search 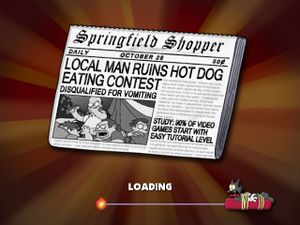 This is the guy you start with?

Level 1 takes place in the Simpsons' own neighborhood, Evergreen Terrace. You take control of Homer as he runs some basic errands, goes to work, and comes home to find a strange black van spying on his family.

As you begin the game, Bart will explain to you how the basic controls work. If you don't want to listen to him, you can disable the tutorial with a button press or in the options menu.

Either way, talk to Marge to begin the mission. Someone ate every dessert in the house? Now Homer certainly wouldn't have done that, would he?

Drive to the Kwik-E-Mart and talk to Apu. Pick up the ice cream and cola, and this mission is complete. Of course it's easy, it's a tutorial mission. Don't worry, it gets harder. 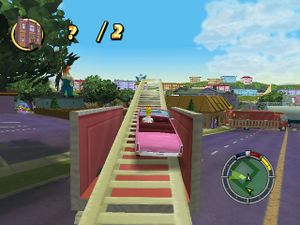 This shortcut will send you flying over the Krusty Burger to victory.

Lisa forgot her science project! You must race Principal Skinner to the school and give Lisa her project back.

Talk to Marge at the Simpson house to begin the mission. Collect the science project, then get into your car and start driving to the school. Along the way, you'll meet Skinner's sedan. Take shortcuts to beat him -- the best shortcut to use is to take a right turn before you get to the Kwik-E-Mart, then go up the fire truck's ladder. You'll careen over the Krusty Burger and into first place.

If you decide to go for a more direct approach, then try bumping Skinner's car from the rear and forcing him to spin out.

Once you beat Skinner to the school, walk inside and talk to Lisa to give back the science project. Hey, where's the gall bladder?

Whoops! Homer "borrowed" some of Flanders' stuff, and now Flanders wants it back.

Go to the Simpson house and talk to Marge. Flanders is miffed AND P.O.ed? Better go talk to him. Run next door and have a chat with Flanders. Apparently he's even called the police to get his stuff back. Homer thinks up a lame excuse to get out of there, and now he has to go locate the missing items.

Get into your vehicle and follow the radar to collect the items!

After you get the six items, go back to Flanders to complete the mission and get your reward... a prayer from the Lord's number one fan. Stupid Flanders getting happiness from religion!

Today's Homer's workplace evaluation with Mr. Smithers... but what about his prized scorpion farm? There's only one solution: destroy Smithers' car so he can't get to work!

Start off by talking to Marge again to get the scoop. Only one person can help you: Lenny! Go to the Krusty Burger by the gas station to talk to Lenny. He'll inform you that Smithers was last seen near the Kwik-E-Mart. However, you're going to need a bigger vehicle in order to wreck Smithers' car. Wonder if Barney still has the Plow King?

Go across the street and talk to Barney to buy the Plow King. It costs 150 coins. Get into your shiny new vehicle and drive to the Kwik-E-Mart to find Smithers.

Smithers will start driving toward the power plant -- you must destroy his car before he can get there! If you can open up with a head-on collision, it'll do massive damage. If not, then just smash him repeatedly with the Plow King. An alternate tactic is to try to push Smithers off the road so that he runs into a big tree or a house or something for extra damage.

Once you blow up Smithers' car, the mission is complete. He just had it waxed and undercoated, too!

With all of that out of the way, Homer can finally go to work and catch a nap. Drive to the power plant (you may want to use a pay phone so that you don't have to drive the Plow King all over), then enter Homer's workstation and hit the Action button to begin the mission.

Oh, there's a camera! How are you going to sleep with that thing? Sexy girls could be watching Homer on the internet! Go and destroy the power couplings to deactivate the camera.

You won't need a vehicle for this mission, as it is performed entirely on foot. Exit your workstation and destroy the 9 cameras:

Finally, you can get some sleep... Wait, the work day's over? D'OH!

Time to kick back and watch some teevee! What's this about strange black vans? Eh, it's probably nothing.

If you still have the Plow King at this point, you should go to a phone booth and call up the Family Sedan (or the Electaurus if you have it), as this next mission will require some speed.

Drive to the Simpson house, go inside, and press the Action button to sit on the couch. You'll be treated to a cutscene of Homer watching the news. Springfielders are aware of the wasp cameras that are spying on the town, and Kent Brockman mentions something about strange black vans. Well what a coincidence, there's one spying on you now.

Go outside. You'll be instructed to investigate the black van, but don't walk up to it on foot or it'll speed away and leave you in the dust. Go right to your car, by the time you enter your vehicle the van will speed off, so follow it!

In chase missions, keep an eye on the bar on the top-left corner of your screen. If the bar shrinks, you're getting too far away from the vehicle. If it runs out completely you fail the mission, so make absolutely sure to keep the vehicle in sight. If you know the route, you can even drive ahead of the vehicle you're supposed to "chase" -- but if you drive too far ahead you will fail. It is a useful tactic in some of the harder chase missions, but you have to watch your speed or else you'll go too far ahead and fail the mission.

Follow the van and you'll end up at the Burns mansion... so Mr. Burns is behind all this? The plot thickens...

Homer tries to enlist Marge to help his cause, but Marge goes Jack Thompson and wants to prevent the shipment of the new Bonestorm game -- even if it means smashing the crap out of the delivery truck.

Get back in your vehicle and drive to the supermarket to meet Marge. The new Bonestorm game is shipping now, and Marge wants you to help her smash the Bonestorm truck and get the games to prevent them from warping any children with its bloops and bleeps.

You will be forced to use the Canyonero for this mission with Marge driving. Fortunately for you, the Canyonero is a solid vehicle which can stand up to a lot of abuse. You'll start in the parking lot of the grocery store as the Bonestorm truck drives by.

In order to beat a mission like this, you'll have to hit the Bonestorm truck, and it will drop an item for you to collect. You don't need to hit it very hard, just hard enough for it to get jolted. Get ten games and you're done here. Drive on back to the Simpson residence to end the mission. 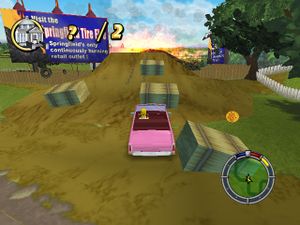 Smithers will cut through the barn, but you should go around and jump over the tire fire instead. 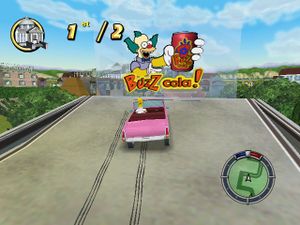 If you're not ahead at this point, you will be after taking this shortcut.

Homer has to race the same guy twice in one day! Beat Smithers to the Burns mansion.

This mission begins at the power plant. Talk to Carl in the parking lot to warn him of Burns' evil spying... wait a sec, Carl's drunk! That's no good. And there goes Smithers to warn Burns! Better chase him!

Get back into your vehicle immediately, as the race begins when you dismiss the mission screen. There are three shortcuts you can use to guarantee victory:

Smithers will take a variety of other shortcuts, but he's not very fast. For the curious, these are the shortcuts he takes:

After you win, talk to Burns and accuse him of spying... WHAT? They were only pizza vans? D'oh!

Congratulations, level 1 is complete! If you're going for 100%, go back to this level using Mission Select and get all the extras. If you want to get on with the storyline, then move on to Bart's level. 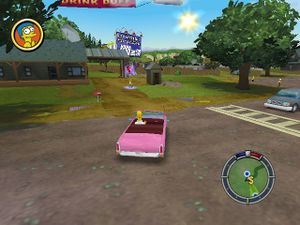 Talk to Cletus to begin this mission. 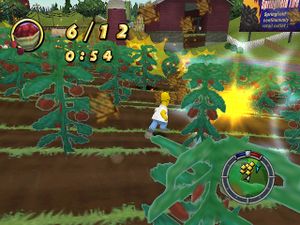 Grab the tomacco harvest on foot to avoid getting a Hit and Run.

Talking to Cletus activates the bonus mission on this level. You can find Cletus near the trailer park, just after the big bridge.

Cletus wants you to get him some cardy-board tubes and collect the tomacco harvest. You have 2 minutes and 30 seconds to complete the entire mission from the second you enter your vehicle to the second you return to Cletus, so you will have to be quick. To make things worse, the level traffic seems to increase -- in terms of both vehicles AND pedestrians, so you will have to be careful to avoid getting a Hit and Run.

To begin, get the cardboard tubes. Drive back toward the bridge and collect the five tubes:

After you get the five cardboard tubes, drive to the tomacco field. It's located near the nuclear power plant. Once you arrive, GET OUT OF YOUR VEHICLE and use the Run button to collect the 12 tomacco plants. If you remain in your vehicle, you risk getting a Hit and Run from knocking down all the tomacco plants with your vehicle. On foot, there is no such danger (unless you kick them or something).

Quickly drive back to Cletus (jump over the tire fire if necessary) and this mission is complete. Your reward is Cletus's Pickup Truck, a vehicle that you will actually be forced to use in some future missions, whether you have it or not.