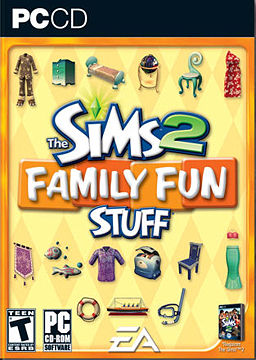 The Sims 2: Family Fun Stuff was the first official stuff pack released for The Sims 2. The Holiday Party Pack was the actual first but it wasn't released as a stuff pack. Family Fun comes with two new themes designed to let you redecorate kids bedrooms. They are fantasy and underwater themes. It also comes with a nautical theme for the living room and some other miscellaneous objects.

Clothing that comes with this pack includes dragon, princess and mermaid costumes as well as new swimwear. It also features Hawaiian clothing for all age groups and genders.

Finally, this pack comes with three new houses in the neighbourhood bin. It also comes with features from other expansion packs including.