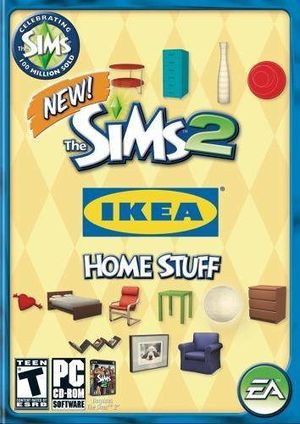 The Sims 2: IKEA Home Stuff is a stuff pack for The Sims 2. It was released on June 24, 2008 in North America, June 25, 2008 in Australia and on June 26, 2008 in Europe. The pack include all new furniture and decoration from Swedish furniture chain IKEA, primarily focusing on living rooms, bedrooms and home offices. It is the second stuff pack to feature products of a real-world company, the first being H&M with The Sims 2: H&M Fashion Stuff. Coincidentally, both are Swedish companies. The stuff pack also, along with other stuff packs, contains features introduced in previous expansion packs such as influence, turn ons and offs and several new build mode tools.