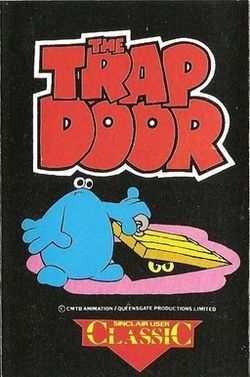 The Trap Door is: an action game, that was released by Piranha (the Amstrad CPC and Commodore 64 versions were developed by Five Ways Software) on the Sinclair ZX Spectrum, Amstrad CPC and Commodore 64 in 1986 and later rereleased by Krajowe Wydawnictwo Czasopism in Poland in 1987; it is based on the CMTB Animation and Queensgate Productions television series of the same name, which was originally aired on BBC1 in 1984 but (like other BBC shows) later moved to Channel Four.

In 2001, this game got remade for the MS-DOS operating system, with a subtitle Berk's Final Days.