The Typing of the Dead/Chapter 1: A Prelude 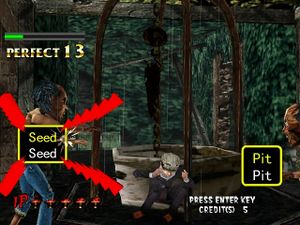 Save the boy to use the back door shortcut.

The chapter starts off with the demon Zeal warning you off from investigating the disappearance of G. This level eases you into the game with two-letter words in the beginning, but quickly ramps up until you're doing short phrases at the boss fight. As you make your way through town, keep an eye out for single letter bonuses.

After taking out three zombies in the street, you'll head inside where three more wait. You find G in the building, although he doesn't know much about what's going on. Two more zombies crash you conversation, which you'll finish afterward. You then go out the back where you'll take out the next zombie just a little too late and be treated to his dying victim's final words. Right after this, the camera swings left and you'll have your first shot at a bonus item. Make sure you take the single letter before saving the lady running across the screen. After the woman tells you to help her friend, you'll turn around to see two zombies sandwiching a boy lying by a well. Take out the left one first, as it's closer to him. If you save the woman and her friend, you'll get to go on a shortcut that has another bonus item. Otherwise, you'll take a longer route through the main back courtyard.

As soon as you go through the shortcut exit, get ready to hit the bonus item across the courtyard. You'll turn to the right after that and have to quickly stop the zombie if you want points for saving the civilian, although he doesn't give you anything for your troubles. You'll face two more zombies before exiting to the back alleyway, where four one-letter bugs come up out of the sewer grate. After that you notice G's bloody tracks.

If you don't manage to save the woman or the boy, you won't find out about the shortcut and you'll continue straight out through the gate. In the courtyard are two zombies, then three single-letter zombie leeches that come out of the fountain, followed by two more zombies. Once you're out in the alleyway, you'll find G's bloody tracks, then face four more single-letter leeches that come out of a sewer grate. 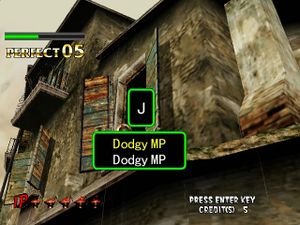 Take out the single-letter thrown objects before tackling the zombie.

Next, you'll be introduced to your first weapon-throwing zombie. He's up in the balcony, and if you think you'll have trouble getting him quickly, wait until he throws and take out his weapon so you don't get stuck in the middle of his word. After that you'll face another two axe-throwing zombies to the right. Use the same approach and wait for a throw to block before killing them. Remember, you can press Esc during any word to cancel out of it if you need to switch targets.

After those zombies comes your first mission. This one is to kill ten zombies in 30 seconds. It can help you more often than hinder you to grab the genre dictionary right before this, but be aware that every once in a while this will get you stuck with all hard words. If you complete the mission successfully, you'll be rewarded with an item. After the mission you'll fight the first multi-hit enemy of the game. This guy comes out of a manhole and jumps all over the place, but his words are fairly short and you only have to nail him three times.

After the monkey-zombie, you'll move down the alley to two simultaneous zombies and you'll want to start with the one on the right, as he gets to you faster. The next enemy comes from above and his text box is occluded by your score meter, so you'll have less time to finish him off if you don't see the words right as he enters the screen. Moving down the alley, you'll see the last shootable bonus item on the left side of the alley. After that you'll see a zombie about to brain a woman hanging from a ledge with a barrel. If you save her from the barrel-zombie and the next one that comes crashing out of the door on the right, she'll give you an extra life. 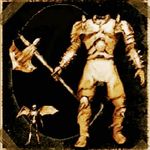 This boss consists of the headless Kuarl controlled by the demon Zeal. This is a straightforward fight – just complete Kuarl's short phrases before he gets to you, then do the same for Zeal's. After five successful inputs on Kuarl, Zeal then flies at you after each three second countdown. Shoot him down three times and he'll be defeated.

When your partners catch up to you, one of them will mention that the chaos going on in the city is reminiscent of the 1998 Curien case. You'll need to look for further clues, so they'll try to meet up with you later at Sunset Bridge.