The Typing of the Dead/Chapter 3: Darkness

This chapter starts out on boat and most of the chapter takes place on water with many hammer throwing enemies. When you first get through the broken, rusty fence in the beginning there are two zombie corpses floating in the water with single-letter words. Next you'll go under a bridge, where you'll be attacked. A lone zombie will drop down onto the prow of the boat, followed by a second who is joined by a hammer-throwing zombie in the background. After another set of zombie dropping down and a hammer-thrower behind him, you'll need to take out one more zombie that hangs from the bridge before moving on. When you start moving you'll get a bonus on the right side of the canal before you get to your first path fork. If you take out the zombie harassing the guy in the boat, he'll be able to open the water gate for you. If not, you'll have to take a different route.

If you save the boat operator, he says he can open the water gate for you. Before he does so, you'll be attacked from the front. Three zombies will drop down onto your prow, one after the other, then you'll have to fight off two zombies above you that throw projectiles. When he opens the gate for you, you'll see two zombies off in the distance with somewhat longer phrases. You'll have plenty of time to type them out though, as their word boxes are available while you're boating up to them.

Moving on down the channel, you'll be attacked by four zombies that bob up from the water right in front of you, followed by two projectile throwers on the bridge above. When they're taken out, you'll face two more projectile-throwers that come in from the left of the bridge before Amy gets a phone call and you continue on under it. As soon as you get by the bridge, you'll face two zombies ready to throw their barrels at you when you turn to the left. Afterward, look behind you and take out the three zombie piranha that attack you. Continuing on the way you were going, you'll come to two leather-masked zombies. As soon as you kill them two simultaneous bonuses will pop up on the wooden barrels right behind them.

You'll continue boating and come to an extra life bonus when you turn the corner to the left and disembark with a cutscene. As soon as you regain control, you'll be attacked by two zombies running straight toward you from the front. Moving past them, you'll take out four bats that swoop down from the ceiling before a mission starts. For this mission, semi-tough zombies will drop down from above on the left and right. You're successful after taking out ten of them. As you move into the hallway beyond, you'll have the chance to rescue a civilian being chased by two zombies. Whether you saved the man in time or not, when you've killed the two zombies you'll see another man get yanked back through a doorway that leads to the chapter boss.

If you didn't save the boat operator, his speedboat crashes into the water gate, blocking that way off and forcing you to take an alternate route to the right. When you turn to the right and head to the circuit breakers, two zombies will run out and attack you, and then two more zombies will swim up to the right side of your boat. When they're dead, you'll continue down the canal until it forks, at which point you can try to save the civilian floating at the start of the left fork. Whether you save him from the single zombie going after him or not, you'll be attacked by a projectile-throwing zombie from above, followed by three zombie fish from the fork on the left. At this point Amy gets a phone call and you'll continue under the bridge along the right fork.

In the next area you can grab a bonus from the crates on the left. As you motor past the crates, you'll be stopped briefly by two zombies attacking from the water on your left before continuing forward and starting the mission. In this mission, you'll need to kill ten zombies in 30 seconds as they come shambling out from a small, dark garage. Be aware that some of them may occasionally lob a projectile at you as well. When the mission is over, you'll be attacked by two hard zombies on the left, and then you'll turn the boat to the right where you can snag another bonus and continue on.

You'll soon come to a woman being attacked by a zombie, but the zombie is fairly far from her so it shouldn't be hard to get him before he gets her. Turning the corner, you'll come to two projectile-throwing zombies above you, then you'll head under another bridge where you'll face another thrower on the right, followed by one on the left. From there you'll head across the channel to an underground entrance where a group bats will come flying out. As you enter it, you'll have to take out four of them yourself. Making your way down the watery tunnel, you'll eventually come to your disembark location where two zombies are waiting for you before you can get out of the boat.

Once you're back on land, you'll get a short cutscene, then continue on to find a man being chased by two zombies. Take them out and you'll see another man get yanked back into a hallway. You then follow him to the chapter boss. 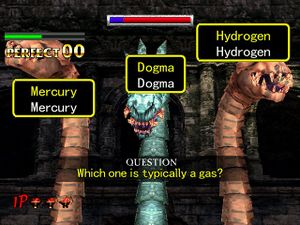 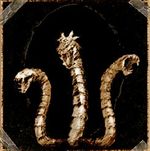 This boss is a combination of three serpents and you fight him in two parts, each part requiring that you deplete separate health bars. In the first part, all three serpents are in front of you and you'll have questions asked of you throughout the fight. When a question appears, three answers will be given as the target phrases for each of the serpents. You have to quickly read and understand the question, then choose the correct answer of the three and type it out. Typing any answer at all counts as a hit with normal grading (i.e. A, B, C, etc.), but if you type the wrong word or you don't type the correct one fast enough, that serpent will attack you for one life. When you've correctly answered six questions, you'll have killed off the weaker red snakes on the sides, but the blue one escapes and you'll have to move on to the second part of the fight.

In the next part the blue serpent will either be swimming around in water if you didn't open the water gate in the beginning, or slithering around in sand if you did. As the large snake moves around the area, he intermittently stops to attack you. You'll have a brief moment to type out the target phrase when he does. Repel his attacks five times to finally destroy him and move one. You'll see a short cutscene where Amy gets abducted, and you'll need to save her in the next chapter.