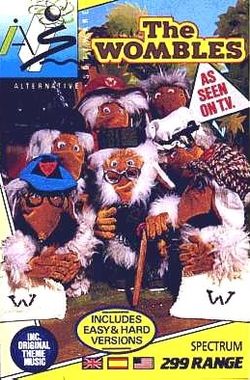 The Wombles is an action game, that was developed by Enigma Variations for Alternative Software, and released on the Sinclair ZX Spectrum, Amstrad CPC and Commodore 64 in 1990; it is based on the FilmFair television series of the same name (which aired upon BBC1 from 1973 to 1975, but had been brought back into the public consciousness by a sketch on Central Television's Spitting Image, in the previous year). Also, even though all the Wombles are on the front of the cassette's inlay card, only three of them actually appear in the game itself - Orinoco (he is controlled by the player), Great Uncle Bulgaria (he gives him his instructions), and Wellington (he tries to steal things from Orinoco).

It is a normal day at the Wombles' burrow. Orinoco is very
hungry, Wellington is outside dodging the human beings,
Great Uncle Bulgaria is hoping that someone will have
dropped a copy of today's "The Times".
It is time for the young Wombles to go out onto the
common to find the litter. Great Uncle Bulgaria gives them
a special task to look out for a copy of The Times and to
bring it back as soon as they can. Tobermory tells them that
he will also be out and about and will need them to find
various items for the new marvellous invention that he is
working on. He gives them the usual warning..."Watch
out for the human beings!".
© FilmFair Limited 1990

This is the full view of Wimbledon Common (ZX version); Orinoco starts out in the Wombles' burrow at the bottom-left of it, where Great Uncle Bulgaria tells him GET WOMBLING AND DO NOT FORGET MY TIMES. REMEMBER, BEWARE OF HUMAN BEINGS.. The first thing Orinoco must try to pick up is a piece of litter (of which three different types are blowing around the common: pieces of paper, McDonald's Corporation burger boxes and Coca-Cola cans), while watching out for humans, squirrels, rats, and bees - for if they touch Orinoco, they'll steal one of his three pie slices that represent his lives. Once he picks up a piece of litter, Orinoco must also watch out for Wellington (because if he touches him, he'll steal half his points, and his litter); he then has to chase after him to get them back, because if he can't catch him before he gets back to the burrow Great Uncle Bulgaria shall confiscate one of his pie slices. Occasionally, a hologram of Tobermory's head shall appear and say BRING ME A (ITEM). I NEED IT IN (NUMBER) MINUTES. - and the race will be on between Orinoco and Wellington, to find it and bring it back to the burrow. If Wellington finds the item first, Orinoco will lose one pie slice but if it is not found by either of them before the time runs out, the game shall immediately end; if Orinoco finds it first, he will have to take it to Tobermory, who will say WELL DONE I HAVE KEPT AN EXTRA PIE FOR YOU. The items Tobermory needs are a television, an oil can, a suitcase, a telephone, and a stereo - and when a hologram of Great Uncle Bulgaria's head appears and says HURRY YOUNG WOMBLES, it means that Orinoco will have to start searching for The Times newspaper. Once he's found it he shall have to take it back to the burrow; the text WELL DONE WOMBLES. THE COMMON IS CLEAN FOR ANOTHER DAY. ORINOCO GETS HIS JUST DESSERTS AND PUDDINGS AND CAKES. will appear on the screen.