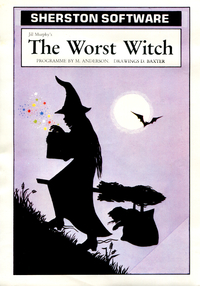 The Worst Witch is a text adventure game that was released by Sherston Software to British primary schools for the BBC Micro, in 1987 (and later for the Acorn Archimedes, in 1989); it is based upon Jill Murphy (1949-2021)'s 1974 book of the same name (and to a lesser extent, Central Television's 1986 direct-to-TV movie it begat which starred Tim Curry, later Zimbo's voice in Aaahh!!! Real Monsters, as the Grand Wizard). The player must help Mildred Hubble (who is the eponymous "Worst Witch") save her school, Miss Cackle's Academy for Witches, from a group of evil witches, by repairing her broken broomstick, flying it out of the school grounds and into a forest, and saying a magic spell to transform them all into snails before giving them to her headmistress (who is the aforementioned Miss Cackle), but if she does not take the cardboard box from fellow witch Maud's room, she will not be able to pick the snails up (and if her small tabby cat runs off while she is in the forest, she shall be trapped there).

This is taken from the back of the disk's inlay card, the front of which is seen in the image to the right:

Although it is possible to save your position on a blank disk if you are playing on a real BBC Micro or Acorn Archimedes, it is not possible to do it with an emulated one; the 32-bit version is also now only playable if you should happen to have the original 3.5" floppy (with an Acorn Archimedes to play it on).