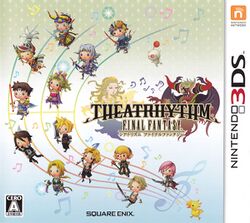 Theatrhythm Final Fantasy (シアトリズム ファイナルファンタジー, Shiatorizumu Fainaru Fantajī?) is a music game developed by indieszero and published by Square Enix exclusively for the Nintendo 3DS. It is a spinoff of the Final Fantasy series that celebrates the series's 25th anniversary by featuring various pieces of music from the series. It is a music game that draws from the entire main series of games for tracks, and lets players use the 3DS's touchscreen to tap, slide, and hold notes. The game was released in Japan on February 16, 2012, in North America on July 3, 2012, in Australia on July 5, 2012 and in Europe on July 6, 2012.

The game follows the events of the gods Chaos and Cosmos, a similar plot to Dissidia: Final Fantasy for the PlayStation Portable. The space between the two is called Rhythm, which gives birth to a crystal that controls music. Chaos causes the crystal to become disrupted, and the only way to return it to normal is to increase a music wave known as "Rhythpo" (known as "Rhythmia" in the English release). As such, various characters from the Final Fantasy universe are brought together in order to harness the power of Rhythpo.