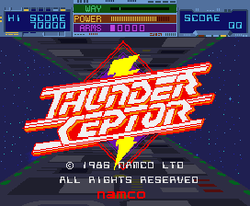 Thunder Ceptor is a three-dimensional shooter arcade game that was released by Namco in 1986. It runs on its own dedicated hardware (a Motorola M6809 CPU running at 1.536 MHz with a Hitachi HD-63701 MCU running at that same frequency, a pair of Motorola M65C02 audio CPUs running at 2.048 MHz, and a Motorola 68000 secondary CPU running at 12.288 MHz) and usurped both Libble Rabble and Toy Pop (the latter of which had been released earlier in 1986) as their company's most powerful eight-bit arcade games; it was also the first game from the company to use an analogue (360-degree) joystick, and a 3-D sequel, titled 3-D Thunder Ceptor II, was released towards the end of the year.

The player must take control of the eponymous Thunder Ceptor, a hyper-way fighter ship developed by the Federal Troops, which is equipped with a rapid-fire zapper cannon and rocket artillery napalm bombs - it can possess up to five of these bombs at a time, and they will be replenished at the end of each round. It also has radar which is displayed in the centre of the screen, and its progress ("WAY") is displayed up at the top of the screen; along with its energy ("POWER") and its bomb ("ARMS"). Its condition is also displayed in the top-left corner of the screen (usually with an image of its blueprints), but will change to say "CAUTION" or "ENERGY EMPTY" when a formation attack is heading towards it (much like the Condition Indicator in Namco's own Bosconian) or it is reduced to four bars of power.