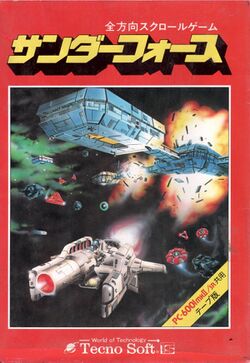 Thunder Force is a free-roaming scrolling shooter released by Technosoft in 1983. It was initially released for the Sharp X1 computer, and later appeared on the Sharp MZ-1500, NEC PC-6001 mkII, and in 1985 on the NEC PC-8801 mkII. In 1984, it was released for the Fujitsu FM-7 and NEC PC-9801 computers as Thunder Force Construction, featuring an add-on that allowed players to create custom made areas, like a level editor or game creation system.

The structure of the game consists of overhead, free-directional scrolling areas and the player's ship is armed with main shot to shoot airborne targets and a bomb shot to shoot ground enemies. Gameplay consists of flying the FIRE LEO over ORN occupied areas while destroying enemy base installations and turrets. Each area has a certain number of shield generators hidden under the ground-based, enemy targets; in order for an area to be completed, the shield generators must be found and destroyed. After doing so, the Dyradeizer will temporally appear and the player must destroy a certain section of it. Once this section is destroyed, the Dyradeizer will disappear and the player will be taken to the next area to repeat the process.

The ORN Empire (antagonists of the game) has built a large asteroid fortress named the Dyradeizer to oppose the Galaxy Federation. In addition to its high firepower capabilities, Dyradeizer is supported by shield generators hidden in various locations by ORN, which render the fortress invisible. In an attempt to destroy Dyradeizer, the Galaxy Federation sends their specially designed fighter, the FIRE LEO (controlled by the player), to locate and destroy the shield generators and defeat Dyradeizer.