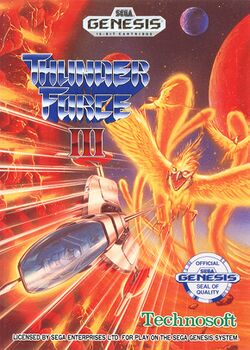 The game takes place directly after Thunder Force II, 100 years after Thunder Force. The ORN Empire has hidden cloaking devices on five planets, obscuring the location of their true base. They have also constructed a remote defense system named Cerberus that is specifically designed to destroy large ships and fleets. To counter this, the Galaxy Federation creates the FIRE LEO-03 Styx, a ship small enough to avoid detection by Cerberus yet containing the firepower of a larger ship. Styx is deployed on the five planets to destroy the cloaking devices, infiltrate the Empire's main base, and destroy its supercomputer, "ChaOs".