From StrategyWiki, the video game walkthrough and strategy guide wiki
(Redirected from Tiger Heli)
Jump to navigation Jump to search 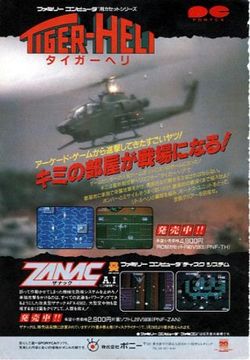 Tiger-Heli was one of the first games developed by Toaplan (a now defunct Japanese arcade game developer) and published by Taito Corporation in 1985. It is a predecessor to Twin Cobra. The player controls a helicopter named Tiger-Heli taking out land-based enemies along the way. The game is a vertical scrolling shooter where the player controls a helicopter taking on hordes of enemies which include tanks, battleships, and artillery. Besides some airplanes taking off, there are no flying enemies in the entire game.

The player's main weapon is an unlimited supply of missiles which travel a max distance of half the screen's height. The player also has two bombs which destroy all objects within a large circular radius. These bombs can be blown off by enemy bullets. The player is killed after only one hit, and is re-spawned to a point approximately one whole vertical screen-length previous. The player is given three lives initially and bonus lives are awarded at 20000 points and every 80000 points thereafter.

Flashing crosses scattered throughout each level award players powerups depending on which color the cross is. A red cross will gives the player one side-firing mini-heli which shoots perpendicular to the player's helicopter. A white cross yields a forward firing mini-heli. It is possible to have a mix and match of side-helis, totalling no more than two. The green cross will award the player with an additional bomb, if the player currently has less than two. Grabbing powerups when not necessary yields 5000 points. Tiger-Heli was the first game to introduce the concept of the Mega-Bomb. There are a total of four stages, all of which start and end with a helipad. After completion of the last stage, the game will restart in a more difficult mode starting on stage 2.

Tiger-Heli was distributed in American arcades by Romstar. Tiger-Heli was developed for the Famicom by Micronics and published by Pony Canyon (who also published Compile's Zanac only a few days earlier) in 1986. This port was localized for NES markets outside of Japan by Acclaim. The game was also published for the Sharp X68000 in a near pixel-perfect conversion.

These bonus tiles can be found occasionally throughout the game. They are not constantly visible, but rather rise up and down periodically. If they are not destroyed after their third appearance, they disappear for good. Shoot them to collect them. An indicator in the bottom left corner of the screen keeps track of how many you have accumulated so far. If you collect ten of them, you will earn an extra life.

Crosses are the one and only opportunity that you get to power the Tiger-Heli up. Crosses cycle through three different colors; red, white, and blue (aqua). The color that a cross is when it is shot determines which power-up you will be offered. You can only possess up to two different power-ups at a time. Refer to the chart below.

What follows is the layout of each of the four different stages, broken up into 8 sections.