Time Pilot has you flying through the centuries, fighting enemy aircraft along the way. Time is divided into periods, or eras, each one with appropriate enemies. In all, there are five eras to contend with, beginning with 1910, where the enemies are mere Biplanes, up through to 2001, which was "the future" as far as 1982 players were concerned. After a certain number of aircraft within a period are killed, a large Mother Ship distinctive to that time will fly onto the screen. It will take several shots to kill this ship, but when you have, your plane will be transported through time to the next period.

There is a scale at the bottom of the screen that lets you know when you've killed enough of the enemy to expect the Mother Ship. In the 1910 period, your enemies appear as Biplanes, and the Mother Ship is a Blimp. In the next period, 1940, you are battling Prop Fighters and a large Bomber is your ultimate enemy. By the time you reach 1970, you are fighting Helicopters, replaced by Jet Fighters in the 1982 period. Another large Bomber is the Mother Ship there. As you pass into the "future", the year 2001 pits you in battle against Flying Saucers, the Mother Ship being an even larger Saucer. 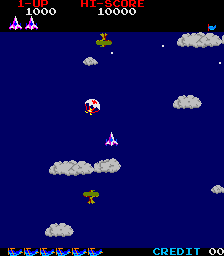 The Biplanes in the first period can only shoot and bomb, the bombs drop from the Biplanes and fall to the bottom of the screen. A good strategy is to fly towards either of the upper corners of the screen. Since your plane is in the center, you will reduce the chances of being bombed and have more time to react to enemies appearing on the edge of the screen in front of your plane.

Watch for formation attacks and falling Parachutes. If all the enemies in a formation attack are killed, you earn 2000 points. Parachutes are important: the first is worth 1000 points and the value increases by 1000 points with each one until the maximum value of 5000 points is reached on the fifth Parachute. From that point on, all Parachutes will be 5000 points unless your plane is destroyed or you kill the Mother Ship and go on to the next period. 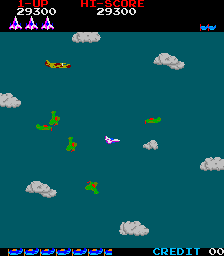 In 1940 Prop Fighters are your enemy. They can only shoot, so flying toward any corner is good, but the upper corners are preferred because Parachutes fall slowly downwards and this will make it easier to pick them up. Once again you should watch for formation attacks worth 2000 points. Another enemy to watch for in 1940 are the dark brown Bombers that will fly horizontally across the screen. They are worth an easy 1500 points, but remember that it takes three shots to kill them. 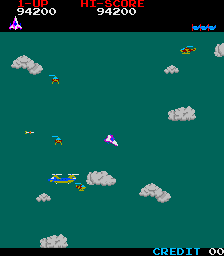 Your mission begins to get dangerous when you reach 1970. The enemy Helicopters are capable of launching Cruise Missiles and since linear flying becomes impossible it is now hard to pick up many Parachutes. The best way to deal with Cruise Missiles is to shoot them. Another way to deflect Missiles is to circle around twice. They only follow you for a short period of time. Be careful not to run into another missile or helicopter gun fire. You must be bold when they come in behind your plane and turn around and shoot them. A great deal of circling is needed to survive these later periods. 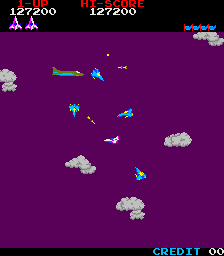 (In some versions of the game, the year is 1983). In 1982 your enemy has developed faster Jet Fighters and more accurate Cruise Missiles, but circling and reversing directions is still the best way to stay alive. These jets are faster then your own jet, but wobbling back and forth makes it more difficult to keep up with you. They turn a little wider around when chasing you. 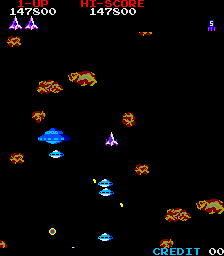 In 2001 you encounter the most hectic of all the time periods. The Flying Saucers have two new types of weapons—one that acts much like a Cruise Missile in that it can change directions, and another that follows straight lines. Both of these weapons can be shot and destroyed. If you survive 2001, you will be sent back to 1910 to do it all over again.

Time Pilot, as with many video games, has a hunting strategy associated with it. You can stay in one time period without killing any of the enemies and continue to pick up Parachutes. The 1940 period is the best in which to hunt Parachutes.

Another slower but safer hunting strategy is to stay on one of the first two waves shooting planes as they come. When the Mother Ship appears, ignore it and keep going after the planes. This isn't really playing the game, but it's good practice and can last a long time.