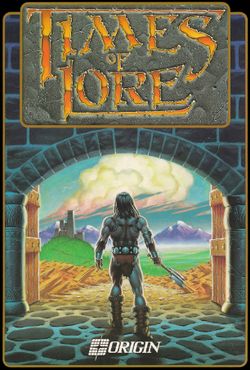 Times of Lore is an action-adventure game developed by Christopher Roberts and released by Origin System in 1988.

Apart from the Ultima series, Origin Systems released several role-playing games. Of these, some retained similar dialog system and command interface, and became known as Light Ultimas. They are Times of Lore and Tangled Tales. The two games are very different from each other.

First of all, Times of Lore has an epic tone, while Tangled Tales leans more towards the humorous. Then, Times of Lore is an action-adventure game, instead of being a role-playing game: it features freedom of exploration and characters interaction, but lacks character development. Instead, Tangled Tales features all three aforementioned aspects, but its combat interface is more similar to a text adventure game, rather than a turn-based RPG.

The following is an excerpt of dialogue from Ultima 5: Warriors of Destiny:

You see: a dashing young farmer.
Name? Christopher.
Job? I fiddle in the fields to keep me fed.
Fiddle? Fields? I pride myself in a job well done, even if one does not enjoy it.
Job? Done? Enjoy? What I really enjoy is writing works of fantasy.
Writing? Fantasy? I'm currently working on an epic called Times of Lore!
Times? Lore? I hope to have it published soon.
Published? Soon? Through Origin, of course. Wilt thou buy it?

No: Then I'll be of little help to you in the future!
Yes: Good! What a nice chap thou art. Enchanted, I'm sure, to have met such an enlightened soul.

The Famicom/NES version is available in English. It has four distinct advantages over all the previous ports:

In this case, it really has to be said: "Japanese do it better"!