Lord Heidric informed you that his son, the prince of Ganestor, was kidnapped in Hampton. 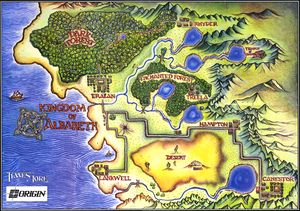 You can barely see a building between Hampton and the mountains... Click to enlarge

You passed already several times through Hampton. This town in north from Ganestor, along the road. You can lodge (rest and save) at the little tavern.

The next morning, go and talk to the Duke of Hampton, who lives in a house in the north of town. Learn and ask about the keyword crime. The abducters went towards Shadowpeak, but where is it?

A weak clue comes from a tavern rumor: "Dark fog is forming in the northeast". Dark = Shadow. Therefore, leave Hampton to the east until you get to the mountains, then continue north until you reach a building.

The bandits's cove is on two floors. Use the red "fire" scroll on the ground floor and defeat all the enelies there. Collect the green scroll and the green key. Go upstairs, and use the blue "ice" scroll to stun the enemies without killing the prisoner. After you punished all the bandits, bump the cell door, and the green key will open it.

The prince of Ganestor will thank you and set you on the next quest straight away.

Some notes about the items: the green key can be dropped and forgotten; the green scroll is explained in the rumors: "Some say there is magic with the power to transport one around the kingdom".