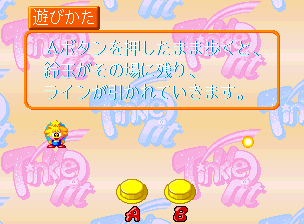 Once you have inserted your coin(s) into the cabinet of Namco's Japan-only 1993 arcade game, Tinkle Pit, and pressed either Start Button (as with The Return of Ishtar, all seven World Stadium games, both Cosmo Gang games, F/A, Emeraldia and Great Sluggers, two players can play this on the same credit), you'll be treated to the game's opening cutscene: Pitt will initially be standing on the left side of the screen with his Tinker Ball behind him, and a piece of Popcorn shall be on the right side as the following three-script text is shown above him (it explains how to use each of the game's two buttons).

Pitt will then drop his Tinker Ball and start walking to the right, as a Heitai (from Toy Pop, 1986) and a Pooka (from Dig Dug, 1982) come into view from the left side of the screen and stop on the line between the Tinker Ball and Pitt (they will not do this for the stages), as the second three-script is shown:

The Tinker Ball will then return to Pitt and kill the Pooka and the Heitai as it strikes them; Pitt will then do a dance as the third three-script text is shown:

Pitt shall then pick up the Popcorn, turn around, and throw it at another Heitai who's come onto the left screen side, as a final three-script text is shown:

Once the Popcorn strikes the Heitai (and kills him), Pitt shall do his dance again; the screen shall then cut to a shot of him standing in the centre of four pictures representing the game's first four worlds (Hana to Midori no Sakai-iki Full Bloom 花と緑の界域フルブルーム, Omocha no Sakai-iki Toy Pop おもちゃの界域トイポップ, Umi no Sakai-iki Emeraldia 海の界域エメラルディア and Okashi no Sakai-iki Sweet Shop お菓子の界域スイートショップ). The one in the top-left (which represents the first world) shall then move down to the centre of the screen as the others move off it and its three-script name comes down into view from the top of the screen - and an English text "GOOD LUCK!!" will also come up from the bottom of the screen before the game starts. It is also worth noting that if you are using a version of MAME that is lower than 0.88u6 (released 17th November 2004) to play this, you will not be able to start a two-player game, nor will you be able to control Pitt when he transforms into Pac-Man (1980) as a result of collecting the Pac-Power powerup.