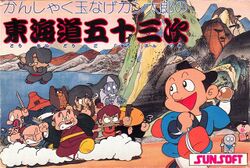 Although commonly referred to as Tokaido Gojuusan Tsugi, the full name of the game is Kanshakudama Nage Kantarou no Toukaidou Gojuusan Tsugi, which can be roughly translated as "explosive throwing Kantarou and the 53 stations of the Tokaido". To further explain, the main character's name is Kantarou, and he throws bombs at his enemies. He is attempting to travel from Kyoto back to Edo (known today as Tokyo) to see his girlfriend Momoko. To get there, he is traveling through the Tokaido highway which is composed of 53 checkpoints along the way. However, an unscrupulous merchant is attempting to capture Kantarou and steal his explosive technique secrets.

Tokaido Gojuusan Tsugi is a horizontally scrolling action game developed by Sunsoft in 1986. It was never released outside of Japan. On June 29, 2001, the game was released for the Windows platform as part of Sunsoft Classic Games 2 along with Ikki (which was itself rereleased as a budget title in 2004). On December 27, 2001, the game was released on the PlayStation as part of Memorial Series: Sunsoft Vol. 3 along with The Wing of Madoola.