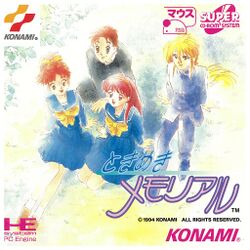 The first game in the series is particularly notable for its "bomb" feature, where neglected, infrequently-dated girls would eventually become angry and gossip to their friends, severely reducing love meters across the board. In the middle of the game, when the number of known girls was high, these "bombs" became the primary concern of the player, forcing careful planning and strategies like round-robin dating. Although the feature was still present in the later games, it was considerably reduced in importance and the difficulty in avoiding it.

Tokimeki Memorial was first released for the PC Engine on May 27, 1994. It was remade as Tokimeki Memorial: forever with you on the PlayStation (1995), Sega Saturn (1996) and PC (1997) with a new opening video, improved graphics and sound, and new minigames. The game was re-released for PC Engine Mini on March 19, 2020 in Japan only.

In 1996, it was ported to the Super Famicom as Tokimeki Memorial: Densetsu no Ki no Shita de, and although drastically reduced in graphic and sound quality (the only voice clips were available during loading), included an exclusive CD with a radio drama and new arrangement of the ending theme, "Futari no Toki", this time sung by the majority of the girls, instead of just Shiori Fujisaki (the heroine of the first game).

Shiori Fujisaki (藤崎 詩織, Fujisaki Shiori?)
Voiced by: Mami Kingetsu
The player's childhood friend. She was once a good friend of the protagonist, but drifted apart prior to high school. Both intelligent and beautiful, Shiori is cute and popular. To win her heart, the player needs very good stats all-around. She is never seen without her trademark yellow headband. Shiori is one of the first three phone numbers the player obtains early in the game.
Saki Nijino (虹野 沙希, Nijino Saki?)
Voiced by: Sachiko Sugawara
Manager of the school's soccer/baseball team (it varies).
Ayako Katagiri (片桐 彩子, Katagiri Ayako?)
Voiced by: Masayo Kawaguchi
An art student who has a habit of using English in everyday speech. She is deathly afraid of water.
Yūko Asahina (朝日奈 夕子, Asahina Yūko?)
Voiced by: Yoko Teppouzuka
A cheerful girl who's very active and sociable. She does poorly in school, though. She is often seen with her childhood friend, Yoshio Saotome.
Yukari Koshiki (古式 ゆかり, Koshiki Yukari?)
Voiced by: Ayako Kurosaki
A polite, soft-spoken girl who's the daughter of a wealthy family.
Mio Kisaragi (如月 未緒, Kisaragi Mio?)
Voiced by: Akiko Sekine
A shy librarian almost never seen without her glasses on.
Yuina Himoo (紐緒 結奈, Himoo Yuina?)
Voiced by: Tomoko Naka
A mad scientist of sorts of the school. She is terrified of koalas.
Mira Kagami (鏡 魅羅, Kagami Mira?)
Voiced by: Rei Igarashi
A beautiful girl with the looks of a model and a fan club, though she is conceited and hard to talk to.
Nozomi Kiyokawa (清川 望, Kiyokawa Nozomi?)
Voiced by: Ayako Sasaki
A tomboyish girl who loves swimming, as well as flowers.
Megumi Mikihara (美樹原 愛, Mikihara Megumi?)
Voiced by: Mikiko Kurihara
Shiori's best friend. She is very shy and soft-spoken.
Yumi Saotome (早乙女 優美, Saotome Yumi?)
Voiced by: YOSHIKIKURIN
Yoshio's little sister, Yumi is energetic and playful. She enters Kirameki High during the player's second year.
Miharu Tatebayashi (館林 見晴, Tatebayashi Miharu?)
Voiced by: Shiho Kikuchi
A hidden girl who seen now and again, but can't officially date in the game. She loves koalas quite a bit.
Yoshio Saotome (早乙女 好雄, Saotome Yoshio?)
Voiced by: Yūji Ueda
Often seen around school usually with other girls, Yoshio provides the player with information on the available girls, including their phone numbers, blood type, and various things they like earning him the nickname "Info Otaku". Yoshio's phone number is one of the three phone numbers the player receives in the beginning of the game. If certain conditions are met, Yoshio will become a rival to the player at the end of the third year, attempting to win the heart of one of the girls. The girl he ends up with are limited only to those the player has met and will depend on the player's own success with the girl he has chosen; however, he does not directly fight for any girl the player has chosen. In the spin-off gameTokimeki no Houkago ~Ne Quiz Shiyo~, Yoshio is a winnable character although the player does not actually end up with him; instead, the player and Yoshio make a pact to both find girlfriends. This makes him the only male character (prior to Tokimeki Memorial Girl's Side, in which the main objective to end up with are male characters) where the main character can end up with him.
Rei Ijuin (伊集院 レイ, Ijūin Rei?)
Voiced by: Narumi Tsunoda
The most popular guy in the school, Rei is the oldest child of a rich and powerful family who makes countless products. However, he has a huge secret he can't reveal to anyone, until which is found by the protagonist that he was a "she". Her little sister, Mei, is a datable girl in Tokimeki Memorial 2. Rei's phone number is one of the first three numbers the player obtains early in the game.