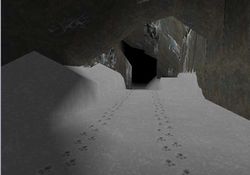 The start of the level

Proceed to walk forward and follow the tracks in the snow; pay close attention to the vertical openings on the walls to the sides. Darts shoot from these openings as soon as you pass them, but you can dodge them easily by running and jumping forward at the same time (make sure you do not stop running because one pause can make you get hit by one). Continue to go forward until you come upon an intersection: take a right here and pass the above opening, instead going to the far right corner with a small sloped rock.

Secret #1: This pick-up is entirely optional and is not required, so if you do not want the pick-up located here just go back to the opening you passed before. If you do want the pick-up (it's a simple Small Medpack), stand behind the sloped rock and grab the top (by pressing the action button) and pull up (by pressing forward). Lara will begin to slide down the slope; as soon as she's at the edge, jump and press the action button to grab hold of the opening above. Pull up and turn the corner to find the Small Medpack (you can also stand under the opening, do a back-flip, and then jump and grab the opening to reach the room). Once you have it, drop back down and return to the large opening you passed.

Back at the opening, begin to climb the various rocks (by pressing the action button) until you reach the very top. Proceed forward, draw your pistols (by pressing the draw weapons button), and quickly shoot (by pressing action) the bats that come toward you.

Secret #2: Before you go to the other side of the cave, you can pick up another secret that's nearby. Turn left at the intersection to enter a smaller room. In the far right corner is a small opening where the secret is; to get to it, simply press action while standing on the left side of the opening (where the snow bank is higher than the others) and pull up. Immediately draw your pistols and kill the bat that is waiting inside- once it's dead, collect the Small Medpack in the corner, drop down, and return back to the intersection.

Now go to the other side of the cave to reach an opening that leads to a room covered in foliage; step inside and drop through the opening in the far left corner, where a door switch lies. Pull it down (by pressing the action button) to open the nearby door and kill the bat that waits inside- once it's gone, climb up the blocks in the far left corner and pull into the opening. Follow the passage to find a room with two large wooden bridges. 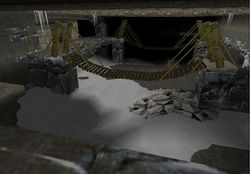 Be sure to kill the wolves below

Two wolves wait below you, so instead of dropping down and acting like Rambo, safely shoot the wolves from atop the ledges. When both of them are dead, go around the walkway to reach the first bridge and go across (or do a running jump to reach the ledge next to the first bridge; it doesn't matter). Cross the second bridge and head through the opening on the left side (if you fall down at any time, you can go to the far left corner where a mummy lies in order to reach a low ledge that you can easily climb up). 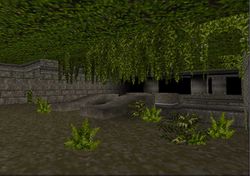 Finish off the bear that's in the pit

Take a right but proceed carefully ahead, as a bear is running around in the pit in front of you. Walk (by pressing the walk button) to the edge of the pit, take out your pistols, and gun down the bear until it is dead (if it is hard to shoot the bear from here, jump to the other side and kill the bear from there). Drop into the pit and go through the opening in the corner. Quickly kill the two bats that attack and then take the Small Medpack that's in the alcove to the left. To exit the room, simply step on the curved tile in front of the door, which then opens and leads you back to the room with the bridges. Go to the far right side of the room and climb up the ledge above the mummy in order to reach the bridges.

Return back to the pit that had the bear and jump over to the other side (PlayStation players will find a Save Crystal here). Go behind the pillars to the far left to spot a Small Medpack; pick it up and begin to go down the staircase. When you're about to go through the opening below, draw your pistols and begin to shoot and jump backwards (by pressing backwards and jump at the same time) in order to kill the two wolves that come toward you. When they're dead, head through the opening. 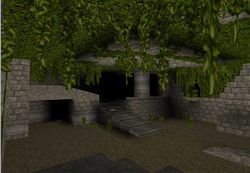 Notice the opening behind the green foliage to the very right: the third secret is here

Descend the both sets of stairs and immediately turn to the right once you reach the bottom. Go inside the small opening underneath the stairs to find a Small Medpack. Turn around and climb up the ledge that's straight ahead.

Now pull down the switch in order to open the double doors on the opposite side- however, they are timed, so you must reach that area as fast as possible. In order to do so, first press the Look button to break the tricky camera angle and then take a running jump to reach the opposite side. Quickly jump through the door. 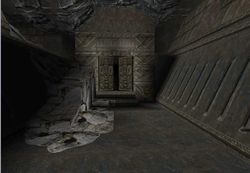 Run up the first set of stairs but stop when you reach the second. Perhaps you have noticed the vertical openings on the sides of the walls that shoot darts; to avoid them, simply run and jump forward at the same time like you did before. Go through the opening and kill the wolf that is waiting in the back left corner, then run over the decrepit tile (the piece of the floor that's in pieces) to make it fall. Drop down into the next room, enter the next one, and jump over the gap that's to the right.

Approach the Large Medpack in the middle of the room and quickly kill the wolf that comes from the other side. Claim your prize and then follow the passage the wolf came from to finally come upon a switch; pull it down, return back, and slide down one of the ramps in order to reach the doors. Run through them to end the level.