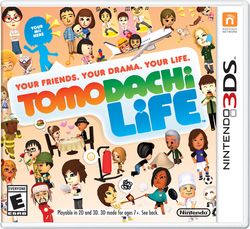 Tomodachi Life (known in Japan as Tomodachi Collection: New Life and in South Korea as Friend Gathering Apartment) is a Mii Character life simulation handheld game for the Nintendo 3DS and 2DS and is the second game in the Tomodachi series preceded by the Nintendo DS Japan-only exclusive, Tomodachi Collection. It was released in Japan on April 18, 2013, North America and Europe on June 6, 2014, Australia on June 7th, 2014, and South Korea on July 17, 2014.