You might be inclined to jump right into the game, but if you don't know much about it, or have trouble identifying what is what, this page outlines some of the basics. 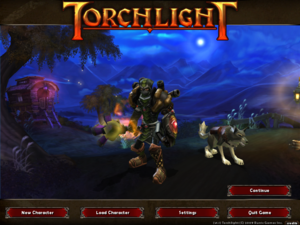 The title screen with a saved character available.

On the character creation screen, you have four options: 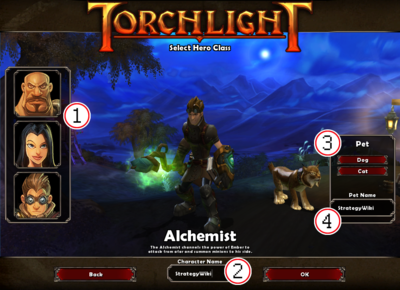 The game's HUD includes your health and mana pools, hot bars, and assigned mouse hotkeys. Additional icons appear above the main display (at the bottom of the screen, in the center) for easy access to additional menus such as the inventory and skills menus.

At the top right of the screen you will see the minimap, which is a transparent box where the walls of the dungeon are drawn so that you can find your bearings and keep track of where you've been and where you have left to explore.

On the top left is where information on your pet's health, mana, skills, status, and items are located. 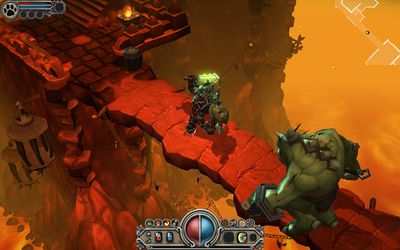 There are monsters in the game that will try to attack you (some may be more or less aggressive or evasive than others). When you kill a monster, you'll receive experience instantaneously and have a chance to receive loot (gear, items, or money). Loot quality varies, and you'll always have a chance to get at least one drop from an enemy (enemies can drop more than piece of loot at a time).

while holding the cursor over an enemy or breakable (like a crate or vase). Your character will automatically turn towards the target and adjust its range to accommodate for the currently equipped weapon (applies to bare hands and feet as well) before attacking the target. If you hold Shift and

together, you will cause your character to attack in the direction of the cursor, without moving (this is a useful technique, primarily used by ranged classes, for guaranteeing that you don't run into danger).

When you want to target an object or enemy, just place the cursor over it. The object you've targeted will be surrounded in a colored glow (red for enemies, white for objects) to help distinguish it from other objects. Using an attack or an ability on a target will either move your character closer towards it, or use the ability from long range.

While attacking an enemy, there's a chance that you may see one of the following combat text messages appear above the enemy:

Details on character statistics are unknown at this time.

There are consumable items in Torchlight that can be used to restore your health or mana. These come in the form of potions (red for health, blue for mana).

There are two types of unique items, according the to Torchlight Manual:

You will get to choose a pet from either a wolf-like dog, or a lynx-like cat at the start of the game. This companion will help you fight and carry items. You can see an additional area of the HUD (at the top left of the screen) where your pet's health, mana, skills, status, and items are located. Pets will flee when their health is reduced to 0. Feeding them a health potions while they are fleeing will make them come back and follow orders again.

Fishing is an alternative to normal gameplay. Through fishing, players can catch fish that either buff their pet or themselves. Typically fish are used to transform a player's pet into a more powerful monster. Some fish sell for a high price, which makes fishing also a good way to gather enough funds to enchant cheap equipment.

To fish, you must first find a fishing spot. These spots look like rippling water, and stand out from the normal surfaces. When close enough, you can

it to begin fishing.

While fishing, you will see two concentric circles. The smaller one represents fishing success, while the bigger one that shrinks and enlarges represents your attempt at fishing. When the larger circle shrinks to fit the smaller one, both will turn red. Also, the fish will tug on the line. When this happens,

on the fishing hook icon in the center. If you timed it correctly, a fish will be brought up; otherwise your attempt will fail (there is no randomized chance of success, only what fish you receive).

Throughout the game you will acquire items. Be it wondrous gear looted from the corpse of an enemy, or several potions purchased from a merchant to keep you alive, you will focus on what you have, what you need, and where to get it all. You can acquire items from shop vendors, killing enemies, destroying objects, and opening treasure chests.

The equipment that you acquire will be used to upgrade your character's statistics to make them perform better (survive longer, deal more damage, etc.). To equip gear, open your inventory window with I and then drag the equipment to the appropriate slot (a helmet goes on one's head). You can quickly swap out equipment by right clicking on it. If an item is red, it means that your character does not fulfill one or more of the requirements (stats, class, or character level) to wear it.

Potions are one time consumables that replenish either your health or your mana. You can place potions on the action bar in the HUD to quickly access them with one of the keyboard shortcuts (1 or 2).