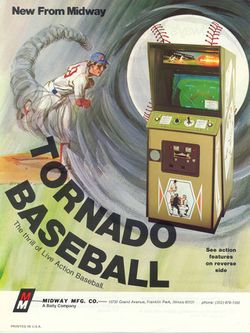 Tornado Baseball is a baseball arcade game which was released by Midway Games in 1976; it runs on an Intel 8080 microprocessor (running at 1.9968 MHz), and was one of the first baseball games to have a lot of players on the field simultaneously. As with Gun Fight, this is a two-player title, and both players will play on the same $0.25 - the pitching player must use one 8-way joystick to select one of eight different pitches, while using a second 2-way joystick, to move the outfielders left and right. The batting player, however, may only use one button to swing his bat; both players will also be using the same set of controls, and they will have to shift left or right every time three outs occur. The number of innings you will receive for one coin depends on how the cabinet is set, but if it is less than nine, you will have to insert another coin if you want to continue with the remaining ones.

This is the first game in the Midway Baseball series. It was followed up by three sequels: Double Play (1977), Extra Inning (1978), and Extra Bases (1980) (the last of which was presented in colour, given that it ran on Midway's Astrocade hardware); because Extra Bases also came in a cocktail cabinet as opposed to an upright, the screen would flip to face the pitching player each time three outs occurred.