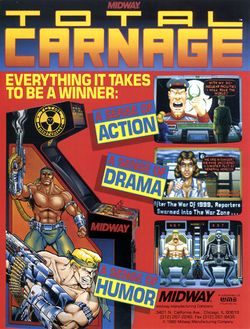 Total Carnage is a multi-directional shooter arcade game which was released by Midway Games on March 10, 1992; it runs on the company's Y-Unit hardware (only with an OKI MSM-6295 running at 8 KHz for speech, instead of that board's original HC-55516), and is the spiritual successor to Williams Electronics' Smash T.V. (1990). The players must use two eight-directional joysticks (one for moving and the other for firing) to take control of two Contra-style soldiers, Capt. Carnage and Maj. Mayhem, fighting against General Akhboob (a parody of Saddam Hussein, 1937-2006) in a futuristic parody of the first Gulf War - and, in addition to killing Akhboob's mutants, they must also rescue reporters and civilians who have strayed into the war zone. By collecting all 220 keys which are hidden throughout this game's three levels, it is also possible to access the hidden "Pleasure Dome" (which, along with some of Akhboob's cutscene quotations, was carried over from Smash T.V.!); the game was initially meant to display one of two endings upon completion of the bonus area, determined by whether the player collected all the treasures in the Pleasure Dome or not, but a bug in the program caused it to always display the good ending with the bad one's text regardless of the collected treasure amount. The electric-chair challenge in the game's second mission was also cut from the SNES conversion.