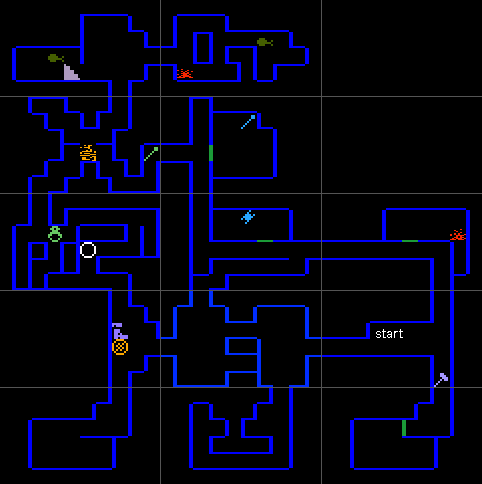 If playing as a Waif, you'll want to hold right at the beginning and immediately run to Room 5C, avoiding the Serpent who won't accept your Boot as payment. Grab the Hammer on the way, equip it while in the empty room, and then go back to 4C and kill the Serpent with a well-placed shot or two.

Then go North to 3C, and pay the Giant Rat off with the Boot if necessary. From here you'll want to head West unless the Fire is in your way, in which case you'll have to take the long way around, which is fine. When you get there, kill the Stirge if he attacks (preferably with a missile), grab the Cursed Small Scroll if convenient (it can be used to pay off any stray Giant Rats), and then head North to Room 2B for the Spear.

Now take a peek at room 2A to the West, and see which route best allows you to deal with the Stirge and/or avoid the Teleport, en route to reaching the Stairs in Room 1A. Avoid engaging the Stirge in melee, as you're likely to lose, but be sure to grab the superior Spear.

If necessary, approach from the South via Room 4A, though that requires you to kill the Serpent and deal with a Confusion trap which can be a real headache. Either way, you'll want to grab the Ring of Protection from Room 3A, though the Paralysis trap can make this a hassle.

The Teleport in 2A sometimes blocks your route to the stairs in Room 1A. In this case, there's simply nothing to be done except take the Teleport again and again until you end up in 1A or 1B.

Once you reach 1A, kill the Stirge with a missile, and grab the Food. Then head east to 1B, grab more Food, head back to 1A, and go downstairs.