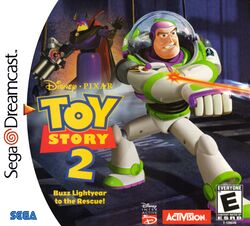 Players control Buzz Lightyear as he tries to rescue Woody after he is kidnapped by Big Al. His moves consist of his wrist laser, which can be charged, a spin attack move and a double jump. There are several accessories that can be unlocked to help Buzz complete some tasks.