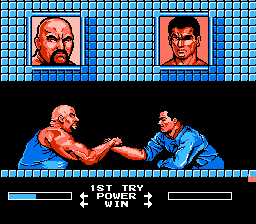 This event is only available in two player head-to-head mode. In essence, it boils down to a competition of who can tap

the fastest and the longest without tiring. Once the event begins, both players must tap their button as quickly as possible in order to build up their power meter. The player with the higher level of power will begin to bring the opponent's arm over to their side. If the opponent fails to push back in time, they will lose the match. The first player to beat the opponent two times is declared the winner.