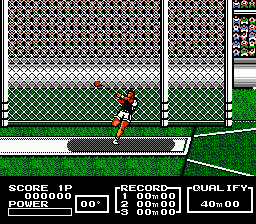 When you begin, rotate the direction pad in a counter clockwise direction to start spinning the athlete. He will build more and more momentum the faster you rotate the controls. After you spin a few times, your athlete will begin to flash. If you do not release the hammer after rotating too many times, your attempt will be disqualified.

Once the athlete begins to flash, press and hold

to initiate your throw. The angle that you throw the hammer will start to increase. When you release the A button, the hammer will be thrown at the resulting angle. The distance the hammer travels is a function of the angle it was thrown combined with the amount of velocity you achieve.