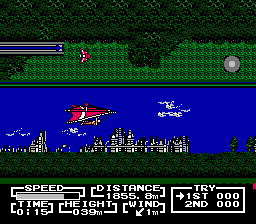 Hang Gliding is one of two exhibition events. You do not need to qualify in order to succeed, but you are given a score based on your performance. The score is determined by how accurately you land on the target at the end of the course. You are given two tries before you are returned to the next day of the games.

You begin on the runway. Simply press and hold

and your character will build up to full speed. You will approach the end of the runway. As you do, press

before you reach the very end to initiate your launch. At that time, release A. If you do not press B in time, your glider will plunge off the runway.

Once you are flying, your next concern is to fly out of the way of the cliff that your glider will be flying toward. You need to hold

to move the glider far enough to avoid the cliff. Use the map at the top to determine your glider's trajectory with respect to the cliff. Once it appears that the glider will clear the cliff, you are safe.

You will need to maintain your height above the ground as you fly. Push

to increase the height of the glider, but no more than necessary. Flying too high will cause you to lose speed, and potentially stall.

Take note of the direction that the wind is blowing. This should only have a small impact on your overall performance, but it is good to know if the wind may push the glider back into the cliff. Once you clear the cliff, you can start pushing

to bring your glider back in line with the target landing zone.

Once you are close enough to the landing zone, bring your glider close to the ground and press

to flair the glider, helping you bring it to a stop. The goal is to land as close to the center of the landing zone (indicated by the white rails) as possible.