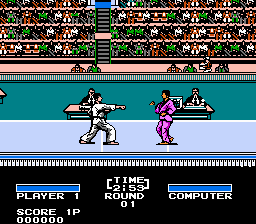 A battle consists of three 3 minute rounds. During that time, you attempt to reduce your opponent's stamina such that they can't stand back up after getting knocked down, or such that you have more stamina than your opponent at the end of the third round.

To do this, you must use the collection of available Taekwondo attacks to strike your opponent. Use kicks and jumping attacks to fight from a distance, and use punches when you are standing up close. Avoid attacks from your opponent to maintain your own stamina.