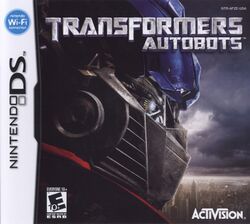 Transformers: Autobots is a Transformers game for the Nintendo DS, released on June 26, 2007.

Unlike games such as Pokémon Diamond and Pearl and Mega Man Battle Network the version differences are more than cosmetic; in addition to the missions being unique to each version the free-roam portion also behaves differently. In the Autobots version, Decepticon Drones (an enemy type which was created specifically for the games and does not appear in the movie) will attack without warning during free roam. In the Decepticons version, the more honourable Autobots are scattered around in their vehicle modes but won't attack you until you attack something or transform. In both versions destroying human property will soon attract the attention of the local law enforcement (not unlike the Grand Theft Auto series)—but only Decepticons get experience points for doing so.

Other: Online · Forged to Fight · Battlegrounds