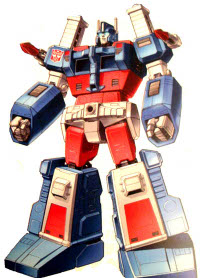 A commander could want no finer a soldier than Ultra Magnus. Despite his incredible fighting skills, courage and unmatched talent for improvisation on the battlefield, Ultra Magnus is most comfortable when carrying out orders, and is naturally uncomfortable if the mantle of leadership should ever find itself placed upon him.

In Ultra Magnus's mind, he is a follower, not a commander, and his reluctance to change that will see to it that he expends all options before accepting the idea that he is required to lead. And when that time comes about, there is no question that he has all the exceptional qualities of a leader. Although not interested in overall command, Ultra Magnus is the City Commander for Autobot City on Earth, which indicates that he at least is willing to accept a leadership role in a smaller capacity rather than as supreme commander, a role filled by both Optimus Prime and later Rodimus Prime.

Ultra Magnus is armed with missile launchers capable of hitting a target 30 miles away (evidently not true in the game), and transforms into a car carrier able to transport his fellow Autobot troops. The car carrier composes the battle armor that he wears on a near constant basis. Beneath the armor, he is identical to Optimus Prime in appearance, but with a mostly white colouration.

Energon Cubes have two sources. Regular Energon Cubes with no labels are hidden throughout each of the stages. They are only revealed if Ultra Magnus fires his beam rifle in the right locations. Energon Cubes that serve as power-ups can only be obtained from the Seeker jets (either Thundercracker or Skywarp) that fly straight across the screen as opposed to diving. All Energon Cubes, the normal or power-up variety, are worth 1000 points, with the single exception of the D Energon Cube (De-energize) which has no point value.

There are seven letters that spell out the name Rodimus. Each letter is hidden in a different stage. They can be obtained from one of the straight flying seeker jets, just like power-up Energon Cubes, except for the one hidden in stage 8, which contains no seeker jets. If you collect all seven of them by the end of the game, you will be treated to the good ending, and you will be able to play as a secret character.

Among a couple of things that this Transformers gets wrong is the correct palette to use with many of the enemies. Therefore, although the enemies are identified with these names, they may not seem appropriate based on the color schemes.

Despite Blitzwing's triple changing ability, he only ever appears in tank for in this game. As a ground enemy, he should be attacked with Ultra Magnus's missiles in truck mode, or simply jumped over. Blitzwing will proceed to travel to the left under any circumstance, rising and falling with the terrain wherever he goes.

Starscream will only appear two times throughout the whole game; once near the end of the second stage, and once near the end of the seventh. (He appears to look much more like Thrust, and even more like fellow Autobot Fireflight.) He flies straight across the screen to the left. If you shoot him, he will transform into a robot and retreat back to the right. If you manage to shoot him a second time when he returns to the right, you will activate a warp, and Bumblebee will appear to escort you two stages ahead (from stage 2 to 4, or stage 7 to 9). If you perform this trick in stage 2, Starscream will not reappear in stage 7.

Ratbat appears in two of the vertical levels, stage 3 and 6. He simply flies back and forth and shoots at you as he does. If you shoot him, he will transform into a cassette and remain motionless.

It's not immediately clear which cassette bird this is, but one thing is for certain: He is aiming directly for Ultra Magnus. These birds appear quickly and without warning, and usually fly on a straight trajectory towards wherever Magnus was standing when they appeared on the screen.

Once again, it's not immediately clear that this is Soundwave, due to the red color. He only appears in stage 7, initially as just a head popping out of the ice, but eventually rising to waist level in an attempt to ambush you. Since the icy floor is slippery, it's easy to crash into him when you attempt to run in the other direction, so it's best to anticipate his presence and jump over him instead.