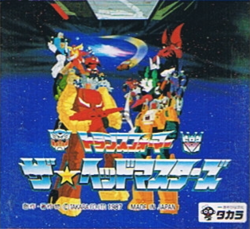 Transformers: The Headmasters (トランスフォーマー ザ・ヘッドマースターズ, toransufoomaa za heddomaasutaazu?) is a 1987 Family Computer Disk System game by Takara based on the popular cartoon series of the same name and released only in Japan. The game stars the Autobot Headmasters as the protagonists and playable characters. The game is infamous for its high level of difficulty and off-key background music.

You play as one of the Autobot Headmaster through four planets, fighting the Decepticons. Unlike it predecessor, Transformers: Convoy no Nazo, players cannot switch between robot and vehicle mode. Instead, each level contains an initial vehicle mode stage, followed by a robot mode stage. Players start out with only Chromedome. They can switch between Autobots at any time, but only if that Autobot has been collected. Players must rescue them throughout the game, as they will be flown in by helicopter in the vehicle mode stage, or found in one of the rooms of the robot mode stage. Since Headmasters was developed for the FDS, it contains a save game feature similar to those found in early The Legend of Zelda and Metroid games. 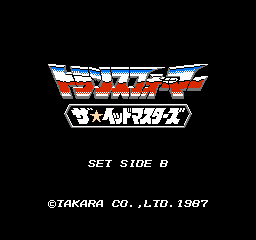