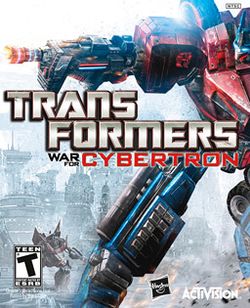 Transformers: War for Cybertron is a third-person shooter developed by High Moon Studios and published by Activision. It was released in North America on June 22, 2010 and in PAL regions on June 25, 2010 for Xbox 360, PlayStation 3, and PC. Two portable versions were released for the Nintendo DS, one featuring an Autobot campaign, the other a Decepticon campaign. A game for the Wii called Transformers: Cybertron Adventures was developed by Next Level Games and utilizes the same characters and setting as War for Cybertron. A sequel, Transformers: Fall of Cybertron was released on August 21, 2012 in North America and on August 24 in Europe.

The game takes place on the planet Cybertron, prior to the Transformers arrival on Earth. The Autobots and Decepticons are engaged in a civil war. The game can be played starting from either faction's perspective, but begins chronologically with the Decepticon campaign. The game revolves around the use of a substance known as Dark Energon, which the evil Decepticon leader Megatron believes will allow him to return the planet to what he refers to as a golden age.